The R-Process Alliance: Fourth Data Release from the Search for R-process-enhanced Stars in the Galactic Halo

This compilation is the fourth data release from the R-Process Alliance (RPA) search for r-process-enhanced stars and the second release based on "snapshot" high-resolution (R ∼ 30,000) spectra collected with the du Pont 2.5 m Telescope. In this data release, we propose a new delineation between the r-I and r-II stellar classes at $[\mathrm{Eu}/\mathrm{Fe}]=+0.7$ , instead of the empirically chosen $[\mathrm{Eu}/\mathrm{Fe}]=+1.0$ level previously in use, based on statistical tests of the complete set of RPA data released to date. We also statistically justify the minimum level of [Eu/Fe] for definition of the r-I stars, [Eu/Fe] > +0.3. Redefining the separation between r-I and r-II stars will aid in the analysis of the possible progenitors of these two classes of stars and determine whether these signatures arise from separate astrophysical sources at all. Applying this redefinition to previous RPA data, the number of identified r-II and r-I stars changes to 51 and 121, respectively, from the initial set of data releases published thus far. In this data release, we identify 21 new r-II, 111 new r-I (plus 3 re-identified), and 7 new (plus 1 re-identified) limited-r stars out of a total of 232 target stars, resulting in a total sample of 72 new r-II stars, 232 new r-I stars, and 42 new limited-r stars identified by the RPA to date. * This paper includes data gathered with the 2.5 m du Pont telescope located at Las Campanas Observatory, Chile. 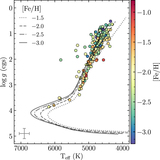