First Results from SMAUG: The Need for Preventative Stellar Feedback and Improved Baryon Cycling in Semianalytic Models of Galaxy Formation

Semianalytic models (SAMs) are a promising means of tracking the physical processes associated with galaxy formation, but many of their approximations have not been rigorously tested. As part of the Simulating Multiscale Astrophysics to Understand Galaxies project, we compare predictions from the FIRE-2 hydrodynamical "zoom-in" simulations to those from the Santa Cruz SAM run on the same halo merger trees, with an emphasis on the global mass flow cycle. Our study includes 13 halos spanning low-mass dwarfs (Mvir ∼ 1010M⊙ at z = 0), intermediate-mass dwarfs (Mvir ∼ 1011M⊙), and Milky Way-mass galaxies (Mvir ∼ 1012M⊙). The SAM and FIRE-2 predictions agree relatively well with each other in terms of stellar and interstellar medium mass but differ dramatically on circumgalactic medium mass (the SAM is lower than FIRE-2 by ∼3 orders of magnitude for dwarfs). Strikingly, the SAM predicts higher gas accretion rates for dwarfs compared to FIRE-2 by factors of ∼10-100, and this is compensated for with higher mass outflow rates in the SAM. We argue that the most severe model discrepancies are caused by the lack of preventative stellar feedback and the assumptions for halo gas cooling and recycling in the SAM. As a first step toward resolving these model tensions, we present a simple yet promising new preventative stellar feedback model in which the energy carried by supernova-driven winds is allowed to heat some fraction of gas outside of halos to at least the virial temperature such that accretion is suppressed. 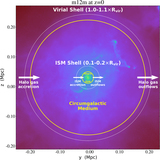