Recent deep millimeter-wave surveys have attempted to measure the carbon monoxide (CO) luminosity function and mean molecular gas density through blind detections of CO emission lines. While the cosmic star formation rate density is now constrained in fields of hundreds of square arcminutes or more, molecular gas studies have been limited to ≤50 arcmin2. These small fields result in significant biases that have not been accounted for in published results. To quantify these biases, we assign CO luminosities to halos in cosmological simulations to produce mock observations for a range of field sizes. We find that fields of ≲10 arcmin2 alter the recovered shape of the luminosity function, causing underestimates of the number of bright objects. Our models suggest that current surveys are sensitive enough to detect sources responsible for approximately half of the cosmic molecular gas density at high redshift. However, uncertainties in the gas density measurement are large, and cosmic variance may double the uncertainty claimed in these surveys. As a result, the field size needed to detect redshift evolution in the molecular gas at high confidence may be more than one order of magnitude larger than what current surveys have achieved. Shot power intensity mapping measurements are particularly sensitive to Poisson variance and require yet larger areas to constrain the gas density or its evolution. We provide a simple prescription for approximating uncertainty in total CO emission as a function of survey area and redshift for both direct detection and intensity mapping surveys. 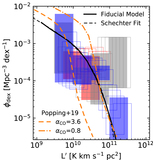