The recent gravitational-wave merger event, GW190521, has challenged our understanding of stellar-mass black hole (BH) formation. The primary and secondary BHs are both inferred to fall inside the pair-instability (PI) mass gap. Here we propose that the formation of such binaries is possible through gas accretion onto the BH remnants of Population III stars born in high-redshift (z > 10) minihalos. Once the parent halo has grown to the atomic-cooling limit, even brief episodes of gas accretion in the dense central regions of the halo can increase the masses of Population III remnant BHs above the PI limit. Starting with a binary black hole (BBH) with an initial mass of O(100) M⊙ we find that it would only need to spend about 100 Myr in the inner few parsecs of an atomic-cooling halo to accrete about 50 M⊙ of material and resemble a system similar to GW190521. The dynamical friction timescale for the binary to sink to the dense inner region of its parent halo is comparable or shorter than the accretion timescale required to increase their mass above the PI limit. Once in the core of the halo, the binary can enter a phase of hyper-Eddington accretion, where it would only take a few thousand years to exceed the PI limit through accretion. Even more massive BBHs could form through this channel, and be detectable by detectors with improved low-frequency sensitivity. Single Population III BH remnants would also grow through accretion and could later form binaries dynamically. As little as a few percent of Population III BH remnants may be sufficient to match the rate of massive BBH mergers inferred from GW190521 of ${0.13}_{-0.11}^{+0.3}\,{\mathrm{Gpc}}^{-3}\,{\mathrm{yr}}^{-1}$ . 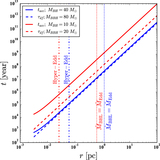