We report the APOGEE-2S+ discovery of a unique collection of nitrogen-enhanced mildly metal-poor giant stars, peaking at [Fe/H] ∼ -0.89 with no carbon enrichment, toward the Small and Large Magellanic Clouds (SMC and LMC), with abundances of light- (C, N), odd-Z (Al, K), and α-elements (O, Mg, Si) that are typically found in Galactic globular clusters (GCs). Here we present 44 stars in the SMC and LMC that exhibit significantly enhanced [N/Fe] abundance ratios, well above ([N/Fe] ≳ +0.6) typical Galactic levels at similar metallicity, and a star that is very nitrogen-enhanced ([N/Fe] > +2.45). Our sample consists of luminous evolved stars on the asymptotic giant branch (AGB), eight of which are classified as bona fide semi-regular (SR) variables, as well as low-luminosity stars similar to those of stars on the tip of the red giant branch of stellar clusters in the SMC and LMC. It seems likely that whatever nucleosynthetic process is responsible for these anomalous SMC and LMC stars it is similar to that which caused the common stellar populations in GCs. We interpret these distinctive C-N patterns as observational evidence of the result of tidally shredded GCs in the SMC and LMC. These findings might explain some previous conflicting results over bulge N-rich stars, and broadly help to understand GC formation and evolution. Furthermore, the discovery of such a large population of N-rich AGB stars in the SMC and LMC suggests that multiple stellar populations might not only be exotic events from the past, but can also form at lower redshift. 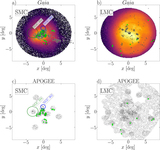