Two Flares with One Shock: The Interesting Case of 3C 454.3

The quasar 3C 454.3 is a blazar known for its rapid and violent outbursts seen across the electromagnetic spectrum. Using γ-ray, X-ray, multiband optical, and very-long-baseline interferometric data we investigate the nature of two such events that occurred in 2013 and 2014 accompanied by strong variations in optical polarization, including a ∼230° electric vector position angle (EVPA) rotation. Our results suggest that a single disturbance was responsible for both flaring events. We interpret the disturbance as a shock propagating down the jet. Under this interpretation the 2013 flare originated most likely due to changes in the viewing angle caused by perhaps a bent or helical trajectory of the shock upstream of the radio core. The 2014 flare and optical polarization behavior are the result of the shock exiting the 43 GHz radio core, suggesting that shock crossings are one of the possible mechanisms for EVPA rotations. 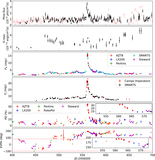