The mass, origin, and evolutionary stage of the binary system LB-1 have been intensely debated, following the claim that it hosts an ∼70M⊙ black hole, in stark contrast with the expectations for Galactic remnants. We conducted a high-resolution, phase-resolved spectroscopic study of its Paschen lines, using the Calar Alto 3.5 m telescope. We find that Paβ and Paγ (after subtraction of the stellar absorption component) are well fitted with a standard double-peaked disk profile. We measured the velocity shifts of the red and blue peaks at 28 orbital phases: the line center has an orbital motion in perfect antiphase with the secondary, and the radial velocity amplitude ranges from 8 to 13 km s-1, for different methods of profile modeling. We interpret this curve as proof that the disk traces the orbital motion of the primary, ruling out the circumbinary disk and the hierarchical triple scenarios. The phase-averaged peak-to-peak half-separation (a proxy for the projected rotational velocity of the outer part of the disk) is ∼70 km s-1, larger than the orbital velocity of the secondary and inconsistent with a circumbinary disk. From those results, we infer a primary mass 4-8 times higher than the secondary mass. Moreover, we show that the intensity ratio of the blue and red peaks has a sinusoidal behavior in phase with the secondary, which we attribute to external irradiation of the outer part of the disk. Finally, we discuss our findings in the context of competing scenarios proposed for LB-1. Further astrometric Gaia data will test between alternative solutions. 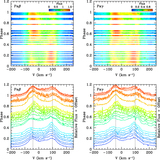