Optical Detection of the 1.1 day Variability at the White Dwarf GD 394 with TESS

Recent discoveries have demonstrated that planetary systems routinely survive the post-main-sequence evolution of their host stars, leaving the resulting white dwarf with a rich circumstellar environment. Among the most intriguing of such hosts is the hot white dwarf GD 394, exhibiting a unique 1.150 ± 0.003 day flux variation detected in Extreme Ultraviolet Explorer (EUVE) observations in the mid-1990s. The variation has eluded a satisfactory explanation, but hypotheses include channeled accretion producing a dark spot of metals, occultation by a gas cloud from an evaporating planet, or heating from a flux tube produced by an orbiting iron-cored planetesimal. We present observations obtained with the Transiting Exoplanet Survey Satellite (TESS) of GD 394. The space-based optical photometry demonstrates a 0.12 ± 0.01% flux variation with a period of 1.146 ± 0.001 days, consistent with the EUVE period and the first re-detection of the flux variation outside of the extreme ultraviolet. We describe the analysis of the TESS light curve and measurement of the optical variation, and discuss the implications of our results for the various physical explanations put forward for the variability of GD 394. 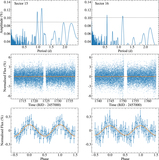