We present a detailed abundance analysis of the three brightest member stars at the top of the giant branch of the ultrafaint dwarf (UFD) galaxy Grus II. All stars exhibit a higher than expected [Mg/Ca] ratio compared to metal-poor stars in other UFD galaxies and in the Milky Way (MW) halo. Nucleosynthesis in high-mass ( $\geqslant $ 20 M⊙) core-collapse supernovae has been shown to create this signature. The abundances of this small sample (three) stars suggests the chemical enrichment of Grus II could have occurred through substantial high-mass stellar evolution, and is consistent with the framework of a top-heavy initial mass function. However, with only three stars it cannot be ruled out that the abundance pattern is the result of a stochastic chemical enrichment at early times in the galaxy. The most metal-rich of the three stars also possesses a small enhancement in rapid neutron-capture (r-process) elements. The abundance pattern of the r-process elements in this star matches the scaled r-process pattern of the solar system and r-process enhanced stars in other dwarf galaxies and in the MW halo, hinting at a common origin for these elements across a range of environments. All current proposed astrophysical sites of r-process element production are associated with high-mass stars, thus the possible top-heavy initial mass function of Grus II would increase the likelihood of any of these events occurring. The time delay between the α and r-process element enrichment of the galaxy favors a neutron star merger as the origin of the r-process elements in Grus II. * This paper includes data gathered with the 6.5 m Magellan Telescopes located at Las Campanas Observatory, Chile. 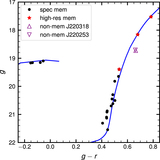