We report on the spectroscopic analysis of RAVE J183013.5-455510, an extremely metal-poor star, highly enhanced in CNO, and with discernible contributions from the rapid neutron-capture process. There is no evidence of binarity for this object. At $[\mathrm{Fe}/{\rm{H}}]$ = -3.57, this star has one of the lowest metallicities currently observed, with 18 measured abundances of neutron-capture elements. The presence of Ba, La, and Ce abundances above the solar system r-process predictions suggests that there must have been a non-standard source of r-process elements operating at such low metallicities. One plausible explanation is that this enhancement originates from material ejected at unusually high velocities in a neutron star merger event. We also explore the possibility that the neutron-capture elements were produced during the evolution and explosion of a rotating massive star. In addition, based on comparisons with yields from zero-metallicity faint supernova, we speculate that RAVE J1830-4555 was formed from a gas cloud pre-enriched by both progenitor types. From analysis based on Gaia DR2 measurements, we show that this star has orbital properties similar to the Galactic metal-weak thick-disk stellar population. * Based on observations gathered with the 6.5 m Magellan Telescopes located at Las Campanas Observatory, Chile. Based on observations collected at the European Organisation for Astronomical Research in the Southern Hemisphere under ESO program 099.D-0428(A). 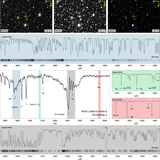