On the Metamorphosis of the Bailey Diagram for RR Lyrae Stars

We collected over 6000 high-resolution spectra of four dozen field RR Lyrae (RRL) variables pulsating either in the fundamental (39 RRab) or in the first overtone (9 RRc) mode. We measured radial velocities (RVs) of four strong metallic and four Balmer lines along the entire pulsational cycle and derived RV amplitudes with accuracies better than 1-2 km s-1. The new amplitudes were combined with literature data for 23 RRab and 3 RRc stars (total sample of 74 RRLs), which allowed us to investigate the variation of the Bailey diagram (photometric amplitude versus period) when moving from optical to mid-infrared bands and to recast the Bailey diagram in terms of RV amplitudes. We found that RV amplitudes for RRab are minimally affected by nonlinear phenomena (shocks) and multiperiodicity (Blazhko effect). The RV slope (logP-A(Vr)) when compared with the visual slope (logP-A(V)) is shallower, and the dispersion, at fixed period, decreases by a factor of two. We constructed homogeneous sets of horizontal branch evolutionary models and nonlinear, convective pulsation models of RRLs to constrain the impact of evolutionary effects on their pulsation properties. Evolution causes, on the Bailey diagram based on RV amplitudes, a modest variation in pulsation period and a large dispersion in amplitude. The broad dispersion in period of the Bailey diagram is mainly caused by variation in RRL intrinsic parameters (stellar mass, chemical composition). Empirical evidence indicates that RV amplitudes are an optimal diagnostic for tracing the mean effective temperature across the RRab instability strip. 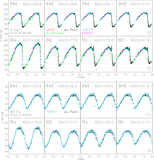