We explore the possibility that GW190412, a binary black hole merger with a non-equal-mass ratio and significantly spinning primary, was formed through repeated black hole mergers in a dense super star cluster. Using a combination of semianalytic prescriptions for the remnant spin and recoil kick of black hole mergers, we show that the mass ratio and spin of GW190412 are consistent with a binary black hole whose primary component has undergone two successive mergers from a population of $\sim 10{M}_{\odot }$ black holes in a high-metallicity environment. We then explore the production of GW190412-like analogs in the CMC Cluster Catalog, a grid of 148 N-body star cluster models, as well as a new model, behemoth, with nearly 107 particles and initial conditions taken from a cosmological MHD simulation of galaxy formation. We show that, if the spins of black holes born from stars are small, the production of binaries with GW190412-like masses and spins is dominated by massive super star clusters with high metallicities and large central escape speeds. While many are observed in the local universe, our results suggest that a careful treatment of these massive clusters, many of which may have been disrupted before the present day, is necessary to characterize the production of unique gravitational-wave events produced through dynamics. 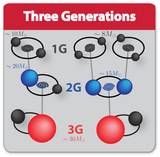