Recently, the Canadian Hydrogen Intensity Mapping Experiment detected periodicity in the bursting rate of the repeating FRB 180916.J0158+65. In a popular class of models, the fast radio bursts (FRBs) are created by magnetic flares of a hyperactive magnetar driven by fast ambipolar diffusion in the core. We point out that in this scenario the magnetar is expected to precess freely with a period of weeks to months. The internal magnetic field B ∼ 1016 G deforms the star, and magnetic flares induce sudden changes in magnetic stresses. The resulting torques and displacements of the principal axes of inertia are capable of pumping a significant amplitude of precession. The anisotropy of the flaring FRB activity, combined with precession, implies a strong periodic modulation of the visible bursting rate. The ultrastrong field invoked in the magnetar model provides: (1) energy for the frequent giant flares, (2) the high rate of ambipolar diffusion, releasing the magnetic energy on the timescale ∼109 s, (3) the core temperature T ≍ 109 K, likely above the critical temperature for neutron superfluidity, (4) strong magnetospheric torques, which efficiently spin down the star, and (5) deformation with ellipticity ɛ ≳ 10-6, much greater than the rotational deformation. These conditions result in a precession with negligible viscous damping, and can explain the observed 16 day period in FRB 180916.J0158+65. The increase of precession period due to the magnetar spindown should become measurable in the near future. 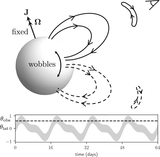