The discovery of the coherence between galaxy rotation and neighbor motion in 1 Mpc scales has recently been reported. Following up on the discovery, we investigate whether the neighbors in such dynamical coherence also present galaxy conformity, using the Calar Alto Legacy Integral Field Area Survey (CALIFA) data and the NASA-Sloan Atlas catalog. We measure the correlation coefficient of g - r colors between the CALIFA galaxies and their neighbors, as a quantitative indicator of galaxy conformity. The neighbors are divided into coherently moving and anticoherently moving ones, the correlation coefficients from which are compared with each other, in various bins of relative luminosity and projected distance. In most cases, the CALIFA galaxies and their neighbors show positive correlation coefficients in g - r color, even for the anticoherent neighbors. However, we find a statistically significant (2.6σ) difference between coherent and anticoherent neighbors, when the neighbor galaxies are bright ( ${\rm{\Delta }}{M}_{r}\leqslant -1.0$ ) and close (D ≤ 400 kpc). That is, when they are bright and close to the CALIFA galaxies, the coherently moving neighbors show stronger conformity with the CALIFA galaxies than the anticoherently moving neighbors. This result supports that the small-scale dynamical coherence may originate from galaxy interactions as galaxy conformity is supposed to do, which agrees with the conclusion of the previous study. 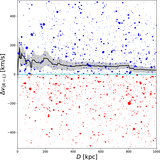