We recently discovered the X-ray/optical outbursting source 3XMM J215022.4-055108. It was best explained as the tidal disruption of a star by an intermediate-mass black hole of mass of a few tens of thousand solar masses in a massive star cluster at the outskirts of a large barred lenticular galaxy at DL = 247 Mpc. However, we could not completely rule out a Galactic cooling neutron star as an alternative explanation for the source. In order to further pin down the nature of the source, we have obtained new multiwavelength observations by XMM-Newton and the Hubble Space Telescope (HST). The optical counterpart to the source in the new HST image is marginally resolved, which rules out the Galactic cooling neutron star explanation for the source and suggests a star cluster of half-light radius ∼27 pc. The new XMM-Newton observation indicates that the luminosity was decaying as expected for a tidal disruption event and that the disk was still in the thermal state with a supersoft X-ray spectrum. Therefore, the new observations confirm the source as one of the best intermediate-mass black hole candidates. 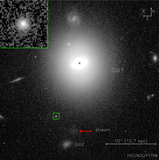