Despite the rapidly growing number of stellar-mass binary black hole mergers discovered through gravitational waves, the origin of these binaries is still not known. In galactic centers, black holes can be brought to each others' proximity by dynamical processes, resulting in mergers. It is also possible that black holes formed in previous mergers encounter new black holes, resulting in so-called hierarchical mergers. Hierarchical events carry signatures such as higher-than-usual black hole mass and spin. Here we show that the recently reported gravitational-wave candidate, GW170817A, could be the result of such a hierarchical merger. In particular, its chirp mass ∼40 M⊙ and effective spin of χeff ∼ 0.5 are the typically expected values from hierarchical mergers within the disks of active galactic nuclei. We find that the reconstructed parameters of GW170817A strongly favor a hierarchical merger origin over having been produced by an isolated binary origin (with an odds ratio of > 103). 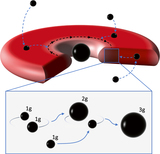