An ALMA Survey of λ Orionis Disks: From Supernovae to Planet Formation

Protoplanetary disk surveys by the Atacama Large Millimeter/submillimeter Array (ALMA) are now probing a range of environmental conditions, from low-mass star-forming regions like Lupus to massive OB clusters like σ Orionis. Here we conduct an ALMA survey of protoplanetary disks in λ Orionis, an ∼5 Myr old OB cluster in Orion with dust mass sensitivities comparable to the surveys of nearby regions (∼0.4 M⊕). We assess how massive OB stars impact planet formation, in particular from the supernova that may have occurred ∼1 Myr ago in the core of λ Orionis; studying these effects is important, as most planetary systems, including our solar system, are likely born in cluster environments. We find that the effects of massive stars, in the form of presupernova feedback and/or a supernova itself, do not appear to significantly reduce the available planet-forming material otherwise expected at this evolved age. We also compare a lingering massive "outlier" disk in λ Orionis to similar systems in other evolved regions, hypothesizing that these outliers host companions in their inner disks that suppress disk dispersal to extend the lifetimes of their outer primordial disks. We conclude with numerous avenues for future work that highlight how λ Orionis still has much to teach us about perhaps one of the most common types of planet-forming environments in the Galaxy. 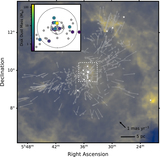