The First Habitable-zone Earth-sized Planet from TESS. I. Validation of the TOI-700 System

We present the discovery and validation of a three-planet system orbiting the nearby (31.1 pc) M2 dwarf star TOI-700 (TIC 150428135). TOI-700 lies in the TESS continuous viewing zone in the Southern Ecliptic Hemisphere; observations spanning 11 sectors reveal three planets with radii ranging from 1 R⊕ to 2.6 R⊕ and orbital periods ranging from 9.98 to 37.43 days. Ground-based follow-up combined with diagnostic vetting and validation tests enables us to rule out common astrophysical false-positive scenarios and validate the system of planets. The outermost planet, TOI-700 d, has a radius of 1.19 ± 0.11 R⊕ and resides within a conservative estimate of the host star's habitable zone, where it receives a flux from its star that is approximately 86% of Earth's insolation. In contrast to some other low-mass stars that host Earth-sized planets in their habitable zones, TOI-700 exhibits low levels of stellar activity, presenting a valuable opportunity to study potentially rocky planets over a wide range of conditions affecting atmospheric escape. While atmospheric characterization of TOI-700 d with the James Webb Space Telescope (JWST) will be challenging, the larger sub-Neptune, TOI-700 c (R = 2.63 R⊕), will be an excellent target for JWST and future space-based observatories. TESS is scheduled to once again observe the Southern Hemisphere, and it will monitor TOI-700 for an additional 11 sectors in its extended mission. These observations should allow further constraints on the known planet parameters and searches for additional planets and transit timing variations in the system. 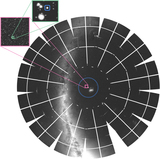