A Rotation Rate for the Planetary-mass Companion DH Tau b

DH Tau b is a young planetary-mass companion orbiting at a projected separation of 320 au from its ∼2 Myr old host star DH Tau. With an estimated mass of 8-22 ${M}_{\mathrm{Jup}}$ this object straddles the deuterium-burning limit, and might have formed via core or pebble accretion, disk instability, or molecular cloud fragmentation. To shed light on the formation history of DH Tau b, we obtain the first measurement of rotational line broadening for this object using high-resolution (R ∼ 25,000) near-infrared spectroscopy from Keck/NIRSPEC. We measure a projected rotational velocity (v sin i) of 9.6 ± 0.7 km s-1, corresponding to a rotation rate that is between 9% and 15% of DH Tau b's predicted breakup speed. This low rotation rate is in good agreement with scenarios in which magnetic coupling between the companion and its circumplanetary disk during the late stages of accretion reduces angular momentum and regulates spin. We compare the rotation rate of DH Tau b to published values for other planetary-mass objects with masses between 0.3 and 20 ${M}_{\mathrm{Jup}}$ and find no evidence of a correlation between mass and rotation rate in this mass regime. Finally, we search for evidence of individual molecules in DH Tau b's spectrum and find that it is dominated by CO and H2O, with no evidence of the presence of CH4. This agrees with expectations given DH Tau b's relatively high effective temperature (∼2300 K). 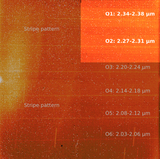