We report the discovery of KMT-2018-BLG-1292Lb, a super-Jovian Mplanet = 5.0 ± 1.2 MJ planet orbiting an F or G dwarf Mhost = 1.2 ± 0.3 M⊙, which lies physically within ${ \mathcal O }(10\,\mathrm{pc})$ of the Galactic plane. The source star is a heavily extincted AI ∼ 5.2 luminous giant that has the lowest Galactic latitude, b = -0°28, of any planetary microlensing event. The relatively blue blended light is almost certainly either the host or its binary companion, with the first explanation being substantially more likely. This blend dominates the light at the I band and completely dominates at the R and V bands. Hence, the lens system can be probed by follow-up observations immediately, i.e., long before the lens system and the source separate due to their relative proper motion. The system is well characterized despite the low cadence, Γ = 0.15-0.20 hr-1, of observations and short viewing windows near the end of the bulge season. This suggests that optical microlensing planet searches can be extended to the Galactic plane at relatively modest cost. 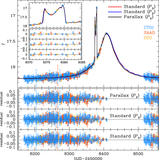