An underlying clock in the extreme flip-flop state transitions of the black hole transient Swift J1658.2-4242


Aims: Flip-flops are top-hat-like X-ray flux variations, which have been observed in some transient accreting black hole binary systems, and feature simultaneous changes in the spectral hardness and the power density spectrum (PDS). They occur at a crucial time in the evolution of these systems, when the accretion disc emission starts to dominate over coronal emission. Flip-flops remain a poorly understood phenomenon, so we aim to thoroughly investigate them in a system featuring several such transitions.
Methods: Within the multitude of observations of during its outburst in early 2018, we detected 15 flip-flops, enabling a detailed analysis of their individual properties and the differences between them. We present observations by XMM-Newton, NuSTAR, Astrosat, Swift, Insight-HXMT, INTEGRAL, and ATCA. We analysed their light curves, searched for periodicities, computed their PDSs, and fitted their X-ray spectra, to investigate the source behaviour during flip-flop transitions and how the interval featuring flip-flops differs from the rest of the outburst.
Results: The flip-flops of Swift J1658.2-4242 are of an extreme variety, exhibiting flux differences of up to 77% within ∼100 s, which is much larger than what has been seen previously. We observed radical changes in the PDS simultaneous with the sharp flux variations, featuring transitions between the quasi-periodic oscillation types C and A, which have never been observed before. Changes in the PDS are delayed, but more rapid than changes in the light curve. Flip-flops occur in two intervals within the outburst, separated by about two weeks in which these phenomena were not seen. Transitions between the two flip-flop states occurred at random integer multiples of a fundamental period of 2.761 ks in the first interval and 2.61 ks in the second. Spectral analysis reveals the high and low flux flip-flop states to be very similar, but distinct from intervals lacking flip-flops. A change of the inner temperature of the accretion disc is responsible for most of the flux difference in the flip-flops. We also highlight the importance of correcting for the influence of the dust scattering halo on the X-ray spectra. 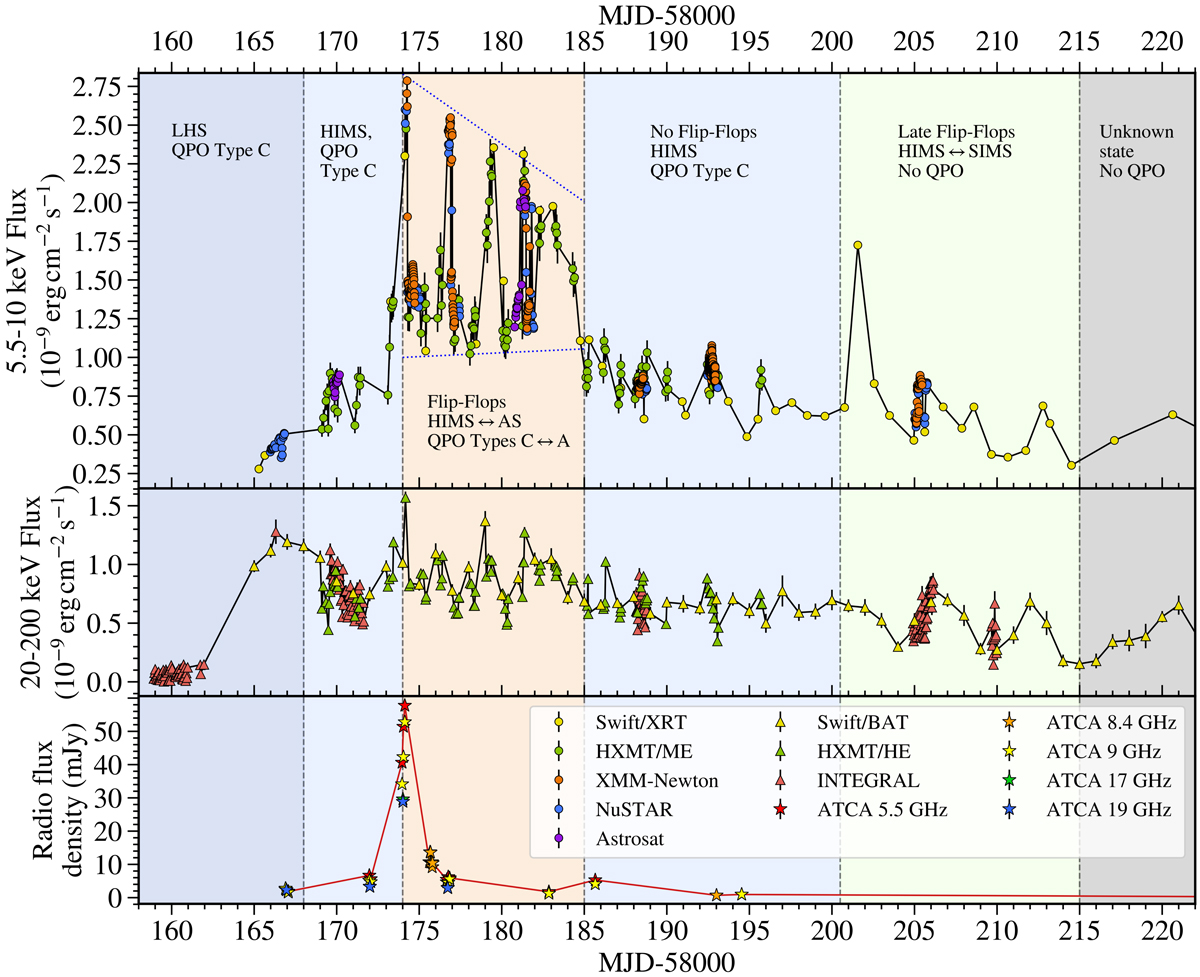