Aims: Asteroid (31) Euphrosyne is one of the biggest objects in the asteroid main belt and it is also the largest member of its namesake family. The Euphrosyne family occupies a highly inclined region in the outer main belt and contains a remarkably large number of members, which is interpreted as an outcome of a disruptive cratering event.
Methods: The goals of this adaptive-optics imaging study are threefold: to characterize the shape of Euphrosyne, to constrain its density, and to search for the large craters that may be associated with the family formation event.
Results: We obtained disk-resolved images of Euphrosyne using SPHERE/ZIMPOL at the ESO 8.2 m VLT as part of our large program (ID: 199.C-0074, PI: Vernazza). We reconstructed its 3D shape via the ADAM shape modeling algorithm based on the SPHERE images and the available light curves of this asteroid. We analyzed the dynamics of the satellite with the Genoid meta-heuristic algorithm. Finally, we studied the shape of Euphrosyne using hydrostatic equilibrium models.
Conclusions: Our SPHERE observations show that Euphrosyne has a nearly spherical shape with the sphericity index of 0.9888 and its surface lacks large impact craters. Euphrosyne's diameter is 268 ± 6 km, making it one of the top ten largest main belt asteroids. We detected a satellite of Euphrosyne - S/2019 (31) 1 - that is about 4 km across, on a circular orbit. The mass determined from the orbit of the satellite together with the volume computed from the shape model imply a density of 1665 ± 242 kg m-3, suggesting that Euphrosyne probably contains a large fraction of water ice in its interior. We find that the spherical shape of Euphrosyne is a result of the reaccumulation process following the impact, as in the case of (10) Hygiea. However, our shape analysis reveals that, contrary to Hygiea, the axis ratios of Euphrosyne significantly differ from those suggested by fluid hydrostatic equilibrium following reaccumulation. 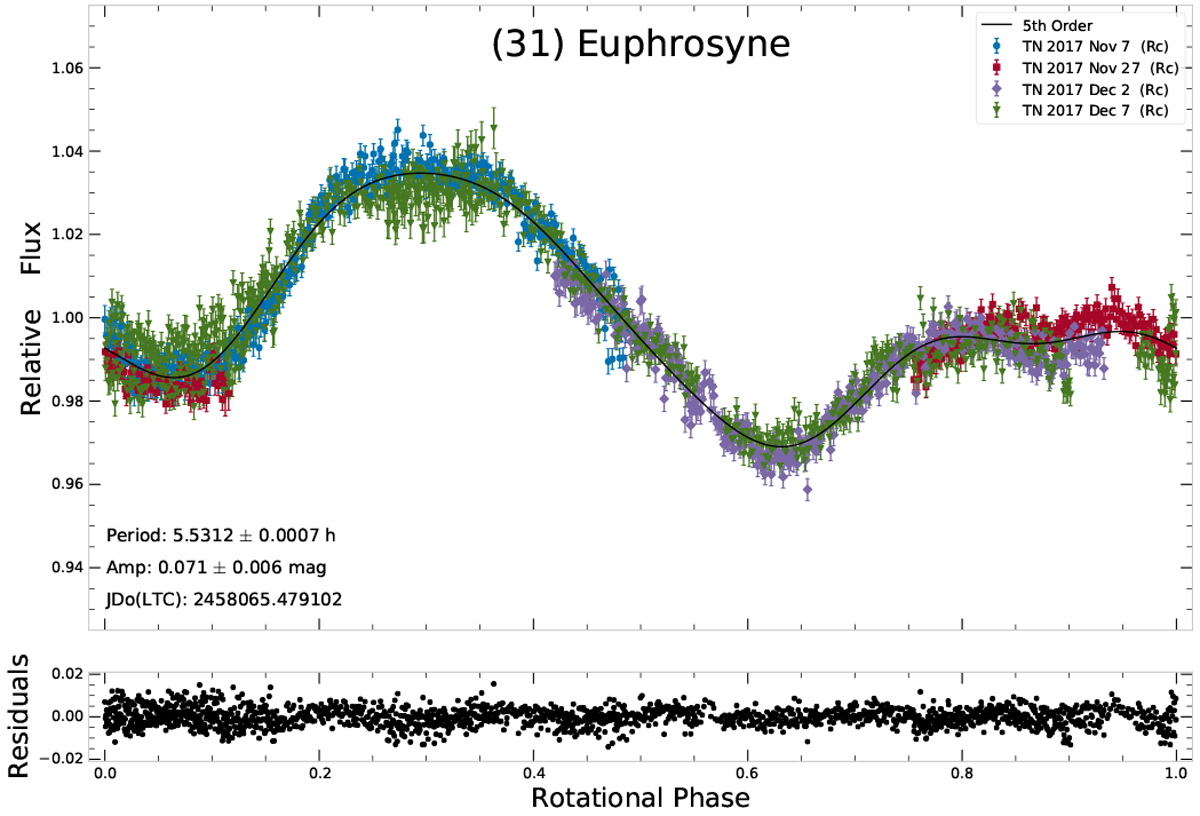