Is HR 6819 a triple system containing a black hole?. An alternative explanation

Context. HR 6819 was recently proposed to be a triple system consisting of an inner B-type giant plus black hole (BH) binary with an orbital period of 40 d and an outer Be tertiary. This interpretation is mainly based on two inferences: that the emission attributed to the outer Be star is stationary and that the inner star, which is used as mass calibrator for the BH, is a B-type giant.
Aims: We re-investigate the properties of HR 6819 to search for a possibly simpler alternative explanation for HR 6819, which does not invoke the presence of a triple system with a BH in the inner binary.
Methods: Based on an orbital analysis, the disentangling of the spectra of the two visible components and the atmosphere analysis of the disentangled spectra, we investigate the configuration of the system and the nature of its components.
Results: Disentangling implies that the Be component is not a static tertiary, but rather a component of the binary in the 40 d orbit. The inferred radial velocity amplitudes of K1 = 60.4 ± 1.0 km s-1 for the B-type primary and K2 = 4.0 ± 0.8 km s-1 for the Be-type secondary imply an extreme mass ratio of M2/M1 = 15 ± 3. We find that the B-type primary, which we estimate to contribute about 45% to the optical flux, has an effective temperature of Teff = 16 ± 1 kK and a surface gravity of log g = 2.8 ± 0.2 [cgs], while the Be secondary, which contributes about 55% to the optical flux, has Teff = 20 ± 2 kK and log g = 4.0 ± 0.3 [cgs]. We infer spectroscopic masses of 0.4-0.1+0.3and 6-3+5 for the primary and secondary which agree well with the dynamical masses for an inclination of i = 32°. This indicates that the primary might be a stripped star rather than a B-type giant. Evolutionary modelling suggests that a possible progenitor system would be a tight (Pi ≈ 2 d) B+B binary system that experienced conservative mass transfer. While the observed nitrogen enrichment of the primary conforms with the predictions of the evolutionary models, we find no indications for the predicted He enrichment.
Conclusions: We suggest that HR 6819 is a binary system consisting of a stripped B-type primary and a rapidly-rotating Be star that formed from a previous mass-transfer event. In the framework of this interpretation, HR 6819 does not contain a BH. Interferometry can distinguish between these two scenarios by providing an independent measurement of the separation between the visible components.

Based on observations made with ESO Telescopes at the La Silla Paranal Observatory under programme ID 63.H-0080 and 073.D-0274. 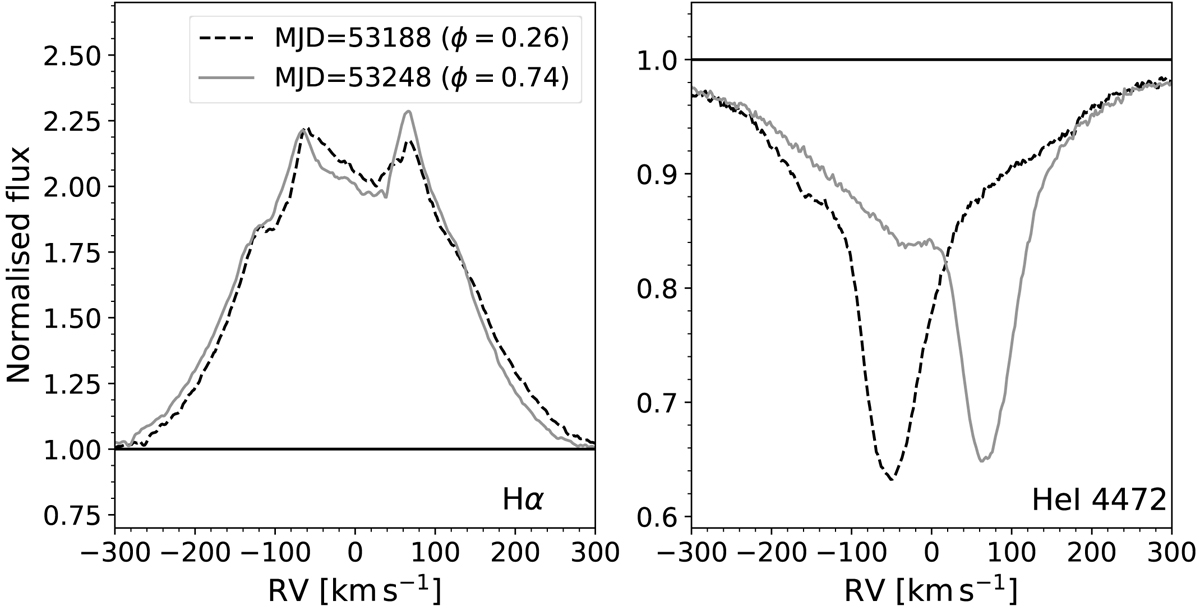