Context. Red supergiant stars possess surface features and extended molecular atmospheres. Photospheric convection may be a crucial factor of the levitation of the outer atmospheric layers. However, the mechanism responsible is still poorly understood.
Aims: We image the stellar surface of V602 Carinae (V602 Car) to constrain the morphology and contrast of the surface features and of the extended atmospheric layers.
Methods: We observed V602 Car with the Very Large Telescope Interferometer PIONIER instrument (1.53-1.78 μm) between May and July 2016, and April and July 2019 with different telescope configurations. We compared the image reconstructions with 81 temporal snapshots of 3D radiative-hydrodynamics (RHD) CO5BOLD simulations in terms of contrast and morphology, using the Structural Similarity Index.
Results: The interferometric data are compatible with an overall spherical disk of angular diameter 4.4 ± 0.2 mas, and an extended molecular layer. In 2016, the reconstructed image reveals a bright arc-like feature toward the northern rim of the photospheric surface. In 2019, an arc-like feature is seen at a different orientation and a new peak of emission is detected on the opposite side. The contrasts of the reconstructed surface images are 11% ± 2% and 9% ± 2% for 2016 and 2019, respectively. The morphology and contrast of the two images are consistent with 3D RHD simulations, within our achieved spatial resolution and dynamic range. The extended molecular layer contributes 10-13% of the total flux with an angular diameter of 6-8 mas. It is present but not clearly visible in the reconstructed images because it is close to the limits of the achieved dynamic range. The presence of the molecular layer is not reproduced by the 3D RHD simulations.
Conclusions: 3D RHD simulations predict substructures similar to the observed surface features of V602 Car at two different epochs. We interpret the structure on the stellar surface as being related to instationary convection. This structure is further convolved to larger observed patches on the stellar surface with our observational spatial resolution. Even though the simulations reproduce the observed features on the stellar surface, convection alone may not be the only relevant process that is levitating the atmosphere.

Based on observations made with the Very Large Telescope Interferometer at the Paranal Observatory under program IDs 097.D-0286, 60.A-9138 (NAOMI science verification) and 2103.D-5029. 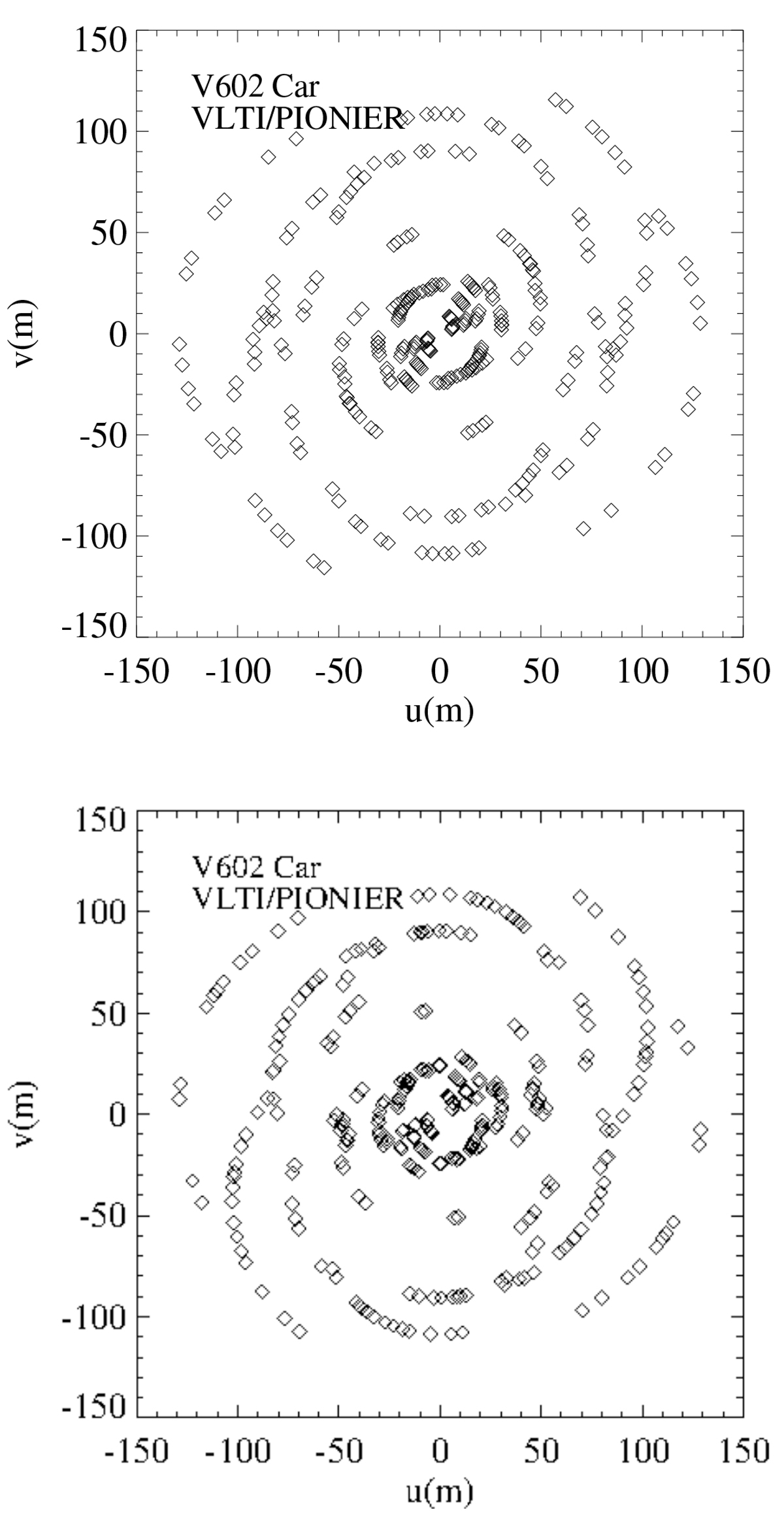