Context. Powerful active galactic nuclei (AGN) are supposed to play a key regulatory role on the evolution of their host galaxies by shaping the thermodynamic properties of their gas component. However, little is known as to the nature and the visibility timescale of the kinematical imprints of AGN-driven feedback. Gaining theoretical and observational insights into this subject is indispensable for a thorough understanding of the AGN-galaxy coevolution and could yield empirical diagnostics for the identification of galaxies that have experienced a major AGN episode in the past.
Aims: We present an investigation of kinematical imprints of AGN feedback on the warm ionized gas medium (WIM) of massive early-type galaxies (ETGs). To this end, we take a two-fold approach that involves a comparative analysis of Hα velocity fields in 123 local ETGs from the CALIFA (Calar Alto Legacy Integral Field Area Survey) integral field spectroscopy survey with 20 simulated galaxies from high-resolution hydrodynamic cosmological SPHgal simulations. The latter were resimulated for two modeling setups, one with and another without AGN feedback.
Methods: In order to quantify the effects of AGN feedback on gas kinematics, we measured three parameters that probe deviations from simple regular rotation by using the kinemetry package. These indicators trace the possible presence of distinct kinematic components in Fourier space (k3, 5/k1), variations in the radial profile of the kinematic major axis (σPA), and offsets between the stellar and gas velocity fields (Δϕ). These quantities were monitored in the simulations from a redshift 3 to 0.2 to assess the connection between black hole accretion history, stellar mass growth, and the kinematical perturbation of the WIM.
Results: Observed local massive galaxies show a broad range of irregularities, indicating disturbed warm gas motions, which is irrespective of being classified via diagnostic lines as AGN or not. Simulations of massive galaxies with AGN feedback generally exhibit higher irregularity parameters than without AGN feedback, which is more consistent with observations. Besides AGN feedback, other processes like major merger events or infalling gas clouds can lead to elevated irregularity parameters, but they are typically of shorter duration. More specifically, k3, 5/k1 is most sensitive to AGN feedback, whereas Δϕ is most strongly affected by gas infall.
Conclusions: We conclude that even if the general disturbance of the WIM velocity is not a unique indicator for AGN feedback, irregularity parameters that are high enough to be consistent with observations can only be reproduced in simulations with AGN feedback. Specifically, an elevated value for the deviation from simple ordered motion is a strong sign for previous events of AGN activity and feedback. 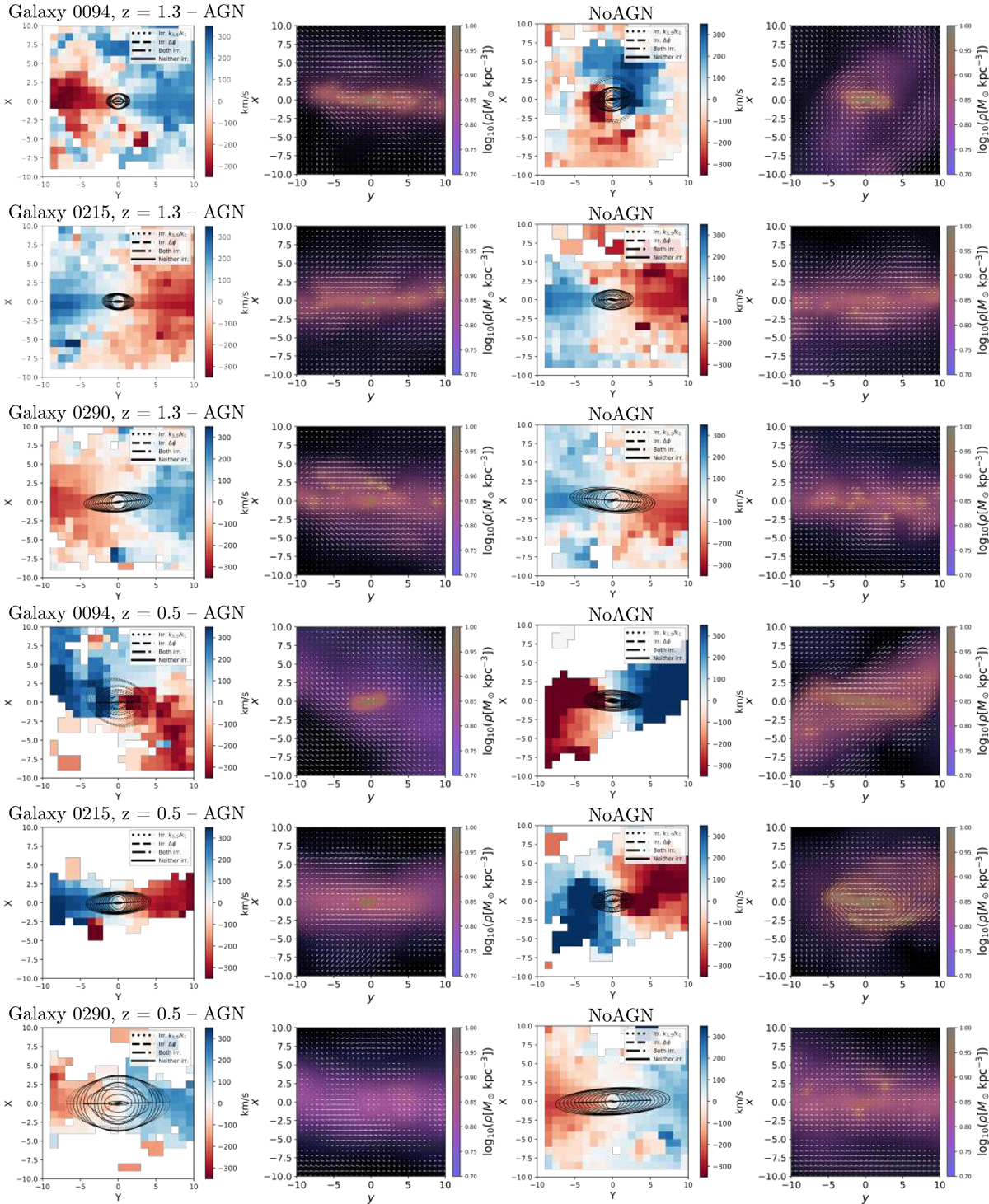