Context. Classical Wolf-Rayet (WR) stars are massive, hydrogen-depleted, post main-sequence stars that exhibit emission-line dominated spectra. For a given metallicity Z, stars exceeding a certain initial mass MsingleWR(Z) can reach the WR phase through intrinsic mass-loss or eruptions (single-star channel). In principle, stars of lower masses can reach the WR phase via stripping through binary interactions (binary channel). Because winds become weaker at low Z, it is commonly assumed that the binary channel dominates the formation of WR stars in environments with low metallicity such as the Small and Large Magellanic Clouds (SMC, LMC). However, the reported WR binary fractions of 30-40% in the SMC (Z = 0.002) and LMC (Z = 0.006) are comparable to that of the Galaxy (Z = 0.014), and no evidence for the dominance of the binary channel at low Z could be identified observationally. Here, we explain this apparent contradiction by considering the minimum initial mass MspecWR(Z) needed for the stripped product to appear as a WR star.
Aims: By constraining MspecWR(Z) and MsingleWR(Z), we estimate the importance of binaries in forming WR stars as a function of Z.
Methods: We calibrated MspecWR using the lowest-luminosity WR stars in the Magellanic Clouds and the Galaxy. A range of MsingleWR values were explored using various evolution codes. We estimated the additional contribution of the binary channel by considering the interval [MspecWR(Z), MsingleWR(Z)], which characterizes the initial-mass range in which the binary channel can form additional WR stars.
Results: The WR-phenomenon ceases below luminosities of log L ≈ 4.9, 5.25, and 5.6 [L⊙] in the Galaxy, the LMC, and the SMC, respectively, which translates to minimum He-star masses of 7.5, 11, 17 M⊙ and minimum initial masses of MspecWR = 18, 23, 37 M⊙. Stripped stars with lower initial masses in the respective galaxies would tend not to appear as WR stars. The minimum mass necessary for self-stripping, MsingleWR(Z), is strongly model-dependent, but it lies in the range 20-30, 30-60, and ≳40 M⊙ for the Galaxy, LMC, and SMC, respectively. We find that that the additional contribution of the binary channel is a non-trivial and model-dependent function of Z that cannot be conclusively claimed to be monotonically increasing with decreasing Z.
Conclusions: The WR spectral appearance arises from the presence of strong winds. Therefore, both MspecWR and MsingleWR increase with decreasing metallicity. Considering this, we show that one should not a-priori expect that binary interactions become increasingly important in forming WR stars at low Z, or that the WR binary fraction grows with decreasing Z. 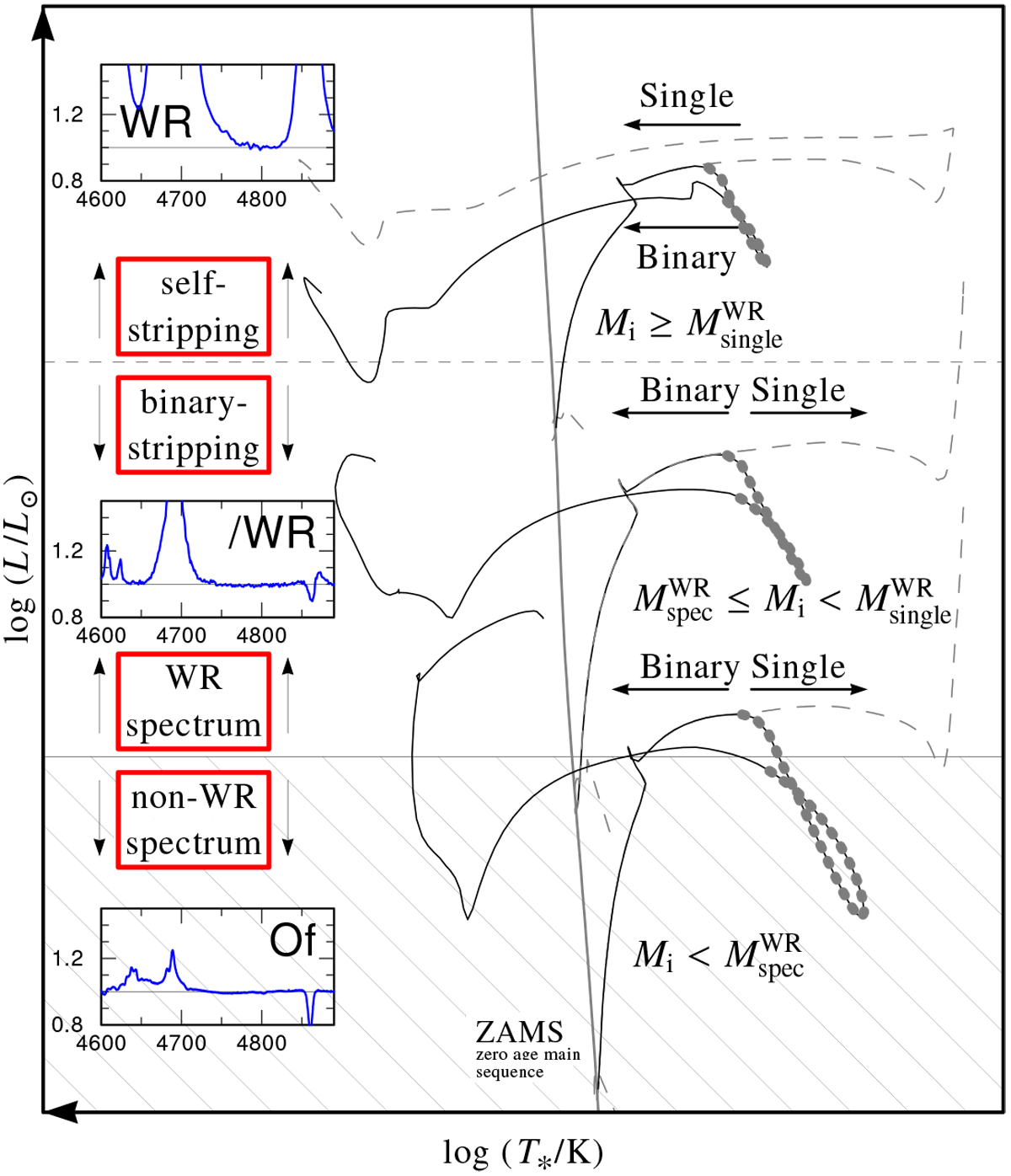