We present a 1.1 mm census of dense cores in the Mon R2 giant molecular cloud with the AzTEC instrument on the Large Millimetre Telescope. We detect 295 cores (209 starless and 86 with protostars) in a two square degree shallow survey. We also carry out a deep follow-up survey of nine regions with low to intermediate (3 < AV < 7) gas column densities and detect 60 new cores in the deeper survey that allows us to derive a completeness limit. After performing corrections for low signal-to-noise cores, we find a median core mass of ∼2.1 M⊙ and a median size of 0.08 pc. 46{{ per cent}} of the cores (141) have masses exceeding the local Bonnor-Ebert mass for cores with T = 12 K, suggesting that in the absence of supporting non-thermal pressure, these regions are unstable to gravitational collapse. We present the core mass function (CMF) for various subdivisions of the core sample. We find that cores with masses >10 M⊙ are exclusively found in regions with high core number densities and that the CMF of the starless cores has an excess of low-mass cores (<5 M⊙) compared to the CMF of protostellar cores. We report a power-law correlation of index 1.99 ± 0.03 between local core mass density and gas column density (as traced by Herschel) over a wide range of size scales (0.3-5 pc). This power law is consistent with that predicted for thermal fragmentation of a self-gravitating sheet. Finally, we find the global core formation efficiency increases with gas column density, reaching ∼43 per cent efficiency for gas with AV ≥ 30. 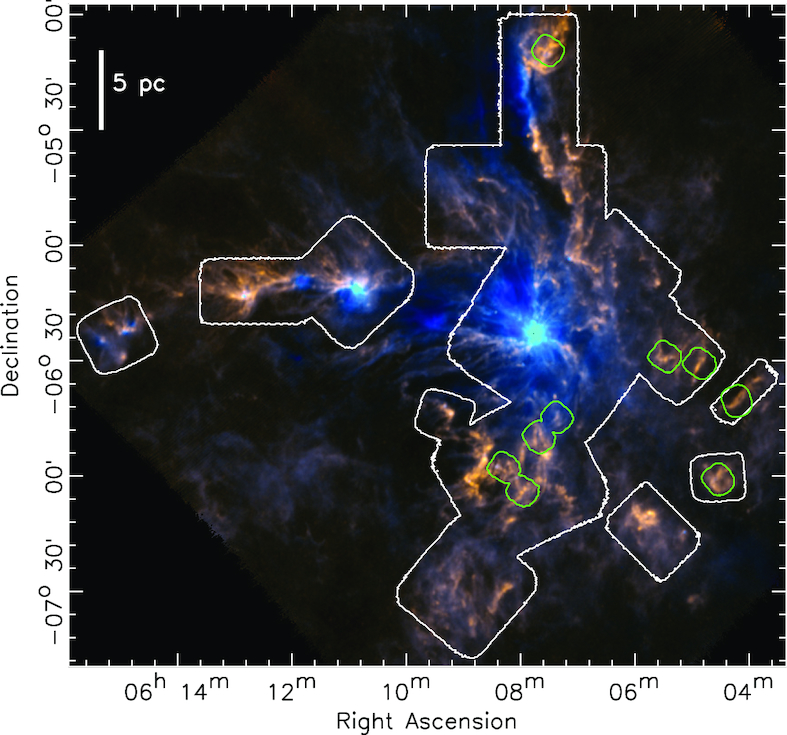