Dragonfly Imaging of the Galaxy NGC 5907: A Different View of the Iconic Stellar Stream

In 2008 it was reported that the stellar stream of the edge-on spiral NGC 5907 loops twice around the galaxy, enveloping it in a giant corkscrew-like structure. Here we present imaging of this iconic object with the Dragonfly Telephoto Array, reaching a 1σ surface brightness level of μ g = 30.3 mag arcsec-2 on spatial scales of 1‧ (the approximate width of the stream). We find a qualitatively different morphology from that reported in the 2008 study. The Dragonfly data do not show two loops but a single curved stream with a total length of 45‧ (220 kpc). The surface brightness of the stream ranges from μ g ≈ 27.6 mag arcsec-2 to μ g ≈ 28.8 mag arcsec-2, and it extends significantly beyond the region where tidal features had previously been detected. We find a density enhancement near the luminosity-weighted midpoint of the stream which we identify as the likely remnant of a nearly disrupted progenitor galaxy. A restricted N-body simulation provides a qualitative match to the detected features. In terms of its spatial extent and stellar mass the stream is similar to Sagittarius, and our results demonstrate the efficacy of low surface brightness-optimized telescopes for obtaining maps of such large streams outside the Local Group. The census of these rare, relatively high mass events complements the census of common, low-mass ones that is provided by studies of streams in the Milky Way halo. 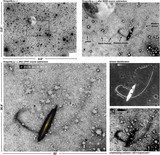