We report on magnetic field measurements of 157 chemically peculiar A/B stars (Ap/Bp) based on resolved, magnetically split absorption lines present in H-band spectra provided by the Sloan Digital Sky Survey (SDSS)/Apache Point Observatory Galactic Evolution Experiment (APOGEE) survey. These stars represent the extreme magnetic end of a still-growing sample of >900 Ap/Bp stars selected among the APOGEE telluric standard stars as those with Ce III absorption lines and/or literature Ap/Bp classifications. The lines most frequently resolved into their split components for these stars in the H-band pertain primarily pertain to Ce III, Cr II, Fe I, Mn II, Si I, and Ca II, in addition to one or more unidentified ions. Using mean magnetic field modulus (< B> ) estimates for transitions with known Landé factors, we estimate effective Landé factors for 5 Ce III lines and 15 unknown lines and proceed to measure < B> of 157 stars, only 3 of which have previous literature estimates of < B> . This 183% increase in the number of Ap/Bp stars for which < B> has been measured is a result of the large number of stars observed by SDSS/APOGEE, extension of high-resolution Ap/Bp star observations to fainter magnitudes, and the advantages of long wavelengths for resolving magnetically split lines. With < B> ∼ 25 kG, the star 2MASS J02563098+4534239 is currently the most magnetic star of the SDSS/APOGEE sample. Effective Landé factors, representative line profiles, and magnetic field moduli are presented. The validity of the results is supported using optical, high-resolution, follow-up spectra for 29 of the stars. 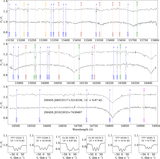