We calibrated a technique to measure dust attenuation in star-forming galaxies. The technique utilizes the stellar-wind lines in Wolf-Rayet stars, which are widely observed in galaxy spectra. The He II 1640 and 4686 features are recombination lines whose ratio is largely determined by atomic physics. Therefore they can serve as a stellar dust probe in the same way as the Balmer lines are used as a nebular probe. We measured the strength of the He II 1640 line in 97 Wolf-Rayet stars in the Galaxy and the Large Magellanic Cloud. The reddening corrected fluxes follow a tight correlation with a fixed ratio of 7.76 for the He II 1640 to 4686 line ratio. Dust attenuation decreases this ratio. We provide a relation between the stellar E(B-V) and the observed line ratio for several attenuation laws. Combining this technique with the use of the nebular Balmer decrement allows the determination of the stellar and nebular dust attenuation in galaxies and can probe its effects at different stellar age and mass regimes, independently of the initial mass function and the star formation history. We derived the dust reddening from the He II line fluxes and compared it to the reddening from the Balmer decrement and from the slope of the ultraviolet continuum in two star-forming galaxies. The three methods result in dust attenuations which agree to within the errors. Future application of this technique permits studies of the stellar dust attenuation compared to the nebular attenuation in a representative galaxy sample. 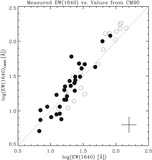