While cooler giant planets are often observed with nonzero eccentricities, the short-period circular orbits of hot Jupiters suggest that they lose orbital energy and angular momentum due to tidal interactions with their host stars. However, orbital decay has never been unambiguously observed. We use data from Gaia Data Release 2 to show that hot Jupiter host stars have a smaller Galactic velocity dispersion than a similar population of stars without hot Jupiters. Since Galactic velocity dispersion is correlated with age, this observation implies that the population of hot Jupiter host stars is on average younger than the field population. The best explanation for this inference is that tidal interactions cause hot Jupiters to inspiral while their host stars are on the main sequence. This observation requires that the typical modified stellar tidal quality factor {Q}* {\prime } for solar-type stars is in the range {log}}10{Q}* {\prime }≲ 7. 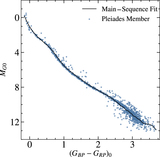