The Global Magneto-Ionic Medium Survey: Polarimetry of the Southern Sky from 300 to 480 MHz

Much data on the Galactic polarized radio emission has been gathered in the last five decades. All-sky surveys have been made, but only in narrow, widely spaced frequency bands—and the data are inadequate for the characterization of Faraday rotation, the main determinant of the appearance of the polarized radio sky at decimeter wavelengths. We describe a survey of polarized radio emission from the southern sky, aiming to characterize the magneto-ionic medium, particularly the strength and configuration of the magnetic field. This work is part of the Global Magneto-Ionic Medium Survey (GMIMS). We have designed and built a feed and receiver covering the band 300-900 MHz for the CSIRO Parkes 64 m Telescope. We have surveyed the entire sky between decl. -90° and +20°. We present data covering 300-480 MHz with angular resolution 81‧-45‧. The survey intensity scale is absolutely calibrated, based on measurements of resistors at known temperatures and on an assumed flux density and spectral index for Taurus A. Data are presented as brightness temperatures. We have applied Rotation Measure Synthesis to the data to obtain a Faraday depth cube of resolution 5.9 rad m-2, sensitivity of 60 mK of polarized intensity, and angular resolution 1.°35. The data presented in this paper are available at the Canadian Astronomy Data Centre. 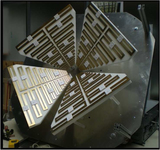