The sensitivities of radial velocity (RV) surveys for exoplanet detection are extending to increasingly longer orbital periods, where companions with periods of several years are now being regularly discovered. Companions with orbital periods that exceed the duration of the survey manifest in the data as an incomplete orbit or linear trend, a feature that can either present as the sole detectable companion to the host star, or as an additional signal overlain on the signatures of previously discovered companion(s). A diagnostic that can confirm or constrain scenarios in which the trend is caused by an unseen stellar rather than planetary companion is the use of high-contrast imaging observations. Here, we present RV data from the Anglo-Australian Planet Search (AAPS) for 20 stars that show evidence of orbiting companions. Of these, six companions have resolved orbits, with three that lie in the planetary regime. Two of these (HD 92987b and HD 221420b) are new discoveries. Follow-up observations using the Differential Speckle Survey Instrument (DSSI) on the Gemini South telescope revealed that 5 of the 20 monitored companions are likely stellar in nature. We use the sensitivity of the AAPS and DSSI data to place constraints on the mass of the companions for the remaining systems. Our analysis shows that a planetary-mass companion provides the most likely self-consistent explanation of the data for many of the remaining systems. 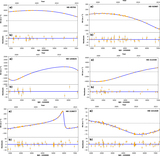