We present the discovery of HD 221416 b, the first transiting planet identified by the Transiting Exoplanet Survey Satellite (TESS) for which asteroseismology of the host star is possible. HD 221416 b (HIP 116158, TOI-197) is a bright (V = 8.2 mag), spectroscopically classified subgiant that oscillates with an average frequency of about 430 μHz and displays a clear signature of mixed modes. The oscillation amplitude confirms that the redder TESS bandpass compared to Kepler has a small effect on the oscillations, supporting the expected yield of thousands of solar-like oscillators with TESS 2 minute cadence observations. Asteroseismic modeling yields a robust determination of the host star radius (R ⋆ = 2.943 ± 0.064 R ⊙), mass (M ⋆ = 1.212 ± 0.074 M ⊙), and age (4.9 ± 1.1 Gyr), and demonstrates that it has just started ascending the red-giant branch. Combining asteroseismology with transit modeling and radial-velocity observations, we show that the planet is a “hot Saturn” (R p = 9.17 ± 0.33 R ⊕) with an orbital period of ∼14.3 days, irradiance of F = 343 ± 24 F ⊕, and moderate mass (M p = 60.5 ± 5.7 M ⊕) and density (ρ p = 0.431 ± 0.062 g cm-3). The properties of HD 221416 b show that the host-star metallicity-planet mass correlation found in sub-Saturns (4-8 R ⊕) does not extend to larger radii, indicating that planets in the transition between sub-Saturns and Jupiters follow a relatively narrow range of densities. With a density measured to ∼15%, HD 221416 b is one of the best characterized Saturn-size planets to date, augmenting the small number of known transiting planets around evolved stars and demonstrating the power of TESS to characterize exoplanets and their host stars using asteroseismology. 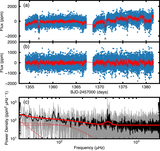