In 2015, K2 observations of the bright (V = 8.9, K = 7.7) star HIP 41378 revealed a rich system of at least five transiting exoplanets, ranging in size from super-Earths to gas giants. The 2015 K2 observations only spanned 74.8 days, and the outer three long-period planets in the system were only detected with a single transit, so their orbital periods and transit ephemerides could not be determined at that time. Here, we report on 50.8 days of new K2 observations of HIP 41378 from summer 2018. These data reveal additional transits of the long-period planets HIP 41378 d and HIP 41378 f, yielding a set of discrete possible orbital periods for these two planets. We identify the most probable orbital periods for these two planets using our knowledge of the planets’ transit durations, the host star’s properties, the system’s dynamics, and data from the ground-based HATNet, KELT, and WASP transit surveys. Targeted photometric follow-up during the most probable future transit times will be able to determine the planets’ orbital periods and will enable future observations with facilities like the James Webb Space Telescope. The methods developed herein to determine the most probable orbital periods will be important for long-period planets detected by the Transiting Exoplanet Survey Satellite, where similar period ambiguities will frequently arise due to the mission’s survey strategy. 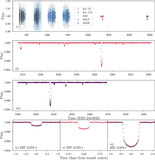