Context. Herschel imaging surveys of galactic interstellar clouds support a paradigm for low-mass star formation in which dense molecular filaments play a crucial role. The detailed fragmentation properties of star-forming filaments remain poorly understood, however, and the validity of the filament paradigm in the intermediate- to high-mass regime is still unclear.
Aims: Here, following up on an earlier 350 μm dust continuum study with the ArTéMiS camera on the APEX telescope, we investigate the detailed density and velocity structure of the main filament in the high-mass star-forming region NGC 6334.
Methods: We conducted ALMA Band 3 observations in the 3.1 mm continuum and of the N2H+(1-0), HC5N(36-35), HNC(1-0), HC3N(10-9), CH3CCH(6-5), and H2CS(3-2) lines at an angular resolution of ~3'', corresponding to 0.025 pc at a distance of 1.7 kpc.
Results: The NGC 6334 filament was detected in both the 3.1 mm continuum and the N2H+, HC3N, HC5N, CH3CCH, and H2CS lines with ALMA. We identified twenty-six compact (<0.03 pc) dense cores at 3.1 mm and five velocity-coherent fiber-like features in N2H+ within the main filament. The typical length (~0.5 pc) of, and velocity difference (~0.8 km s-1) between, the fiber-like features of the NGC 6334 filament are reminiscent of the properties for the fibers of the low-mass star-forming filament B211/B213 in the Taurus cloud. Only two or three of the five velocity-coherent features are well aligned with the NGC 6334 filament and may represent genuine, fiber sub-structures; the other two features may trace accretion flows onto the main filament. The mass distribution of the ALMA 3.1 mm continuum cores has a peak at ~10 M⊙, which is an order of magnitude higher than the peak of the prestellar core mass function in nearby, low-mass star-forming clouds. The cores can be divided into seven groups, closely associated with dense clumps seen in the ArTéMiS 350 μm data. The projected separation between ALMA dense cores (0.03-0.1 pc) and the projected spacing between ArTéMiS clumps (0.2-0.3 pc) are roughly consistent with the effective Jeans length (0.08 ± 0.03 pc) in the filament and a physical scale of about four times the filament width, respectively, if the inclination angle of the filament to line of sight is ~30°. These two distinct separation scales are suggestive of a bimodal fragmentation process in the filament.
Conclusions: Despite being one order of magnitude denser and more massive than the Taurus B211/B213 filament, the NGC 6334 filament has a density and velocity structure that is qualitatively very similar. The main difference is that the dense cores embedded in the NGC 6334 filament appear to be an order of magnitude denser and more massive than the cores in the Taurus filament. This suggests that dense molecular filaments may evolve and fragment in a similar manner in low- and high-mass star-forming regions, and that the filament paradigm may hold in the intermediate-mass (if not high-mass) star formation regime. 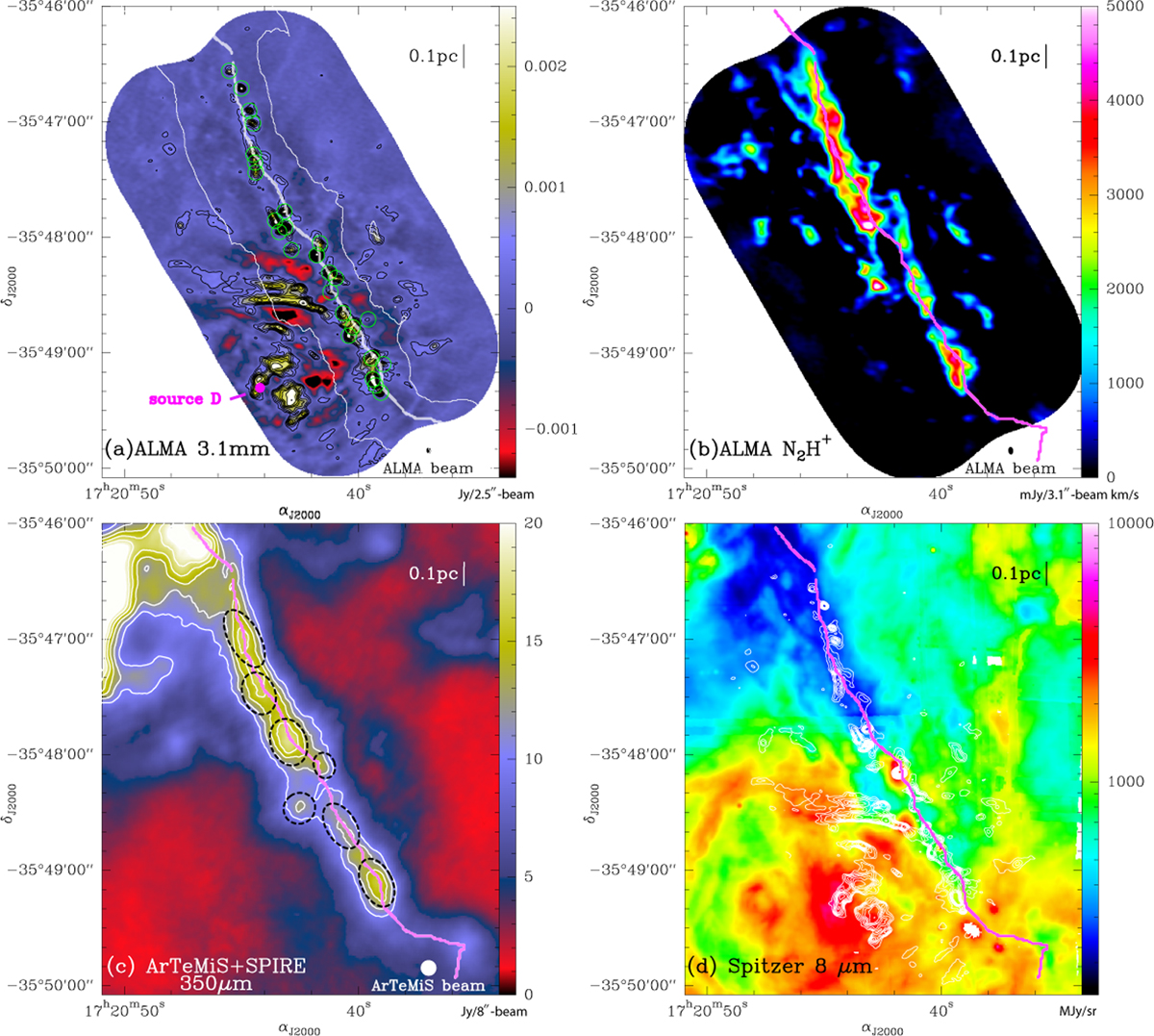