Stellar populations of galaxies in the ALHAMBRA survey up to z ∼ 1. III. The stellar content of the quiescent galaxy population during the last 8 Gyr


Aims: We aim at constraining the stellar population properties of quiescent galaxies. These properties reveal how these galaxies evolved and assembled since z ∼ 1 up to the present time.
Methods: Combining the ALHAMBRA multi-filter photo-spectra with the fitting code for spectral energy distribution MUFFIT (MUlti-Filter FITting), we built a complete catalogue of quiescent galaxies via the dust-corrected stellar mass vs. colour diagram. This catalogue includes stellar population properties, such as age, metallicity, extinction, stellar mass, and photometric redshift, retrieved from the analysis of composited populations based on two independent sets of simple stellar population (SSP) models. We developed and applied a novel methodology to provide, for the first time, the analytic probability distribution functions (PDFs) of mass-weighted age, metallicity, and extinction of quiescent galaxies as a function of redshift and stellar mass. We adopted different star formation histories to discard potential systematics in the analysis.
Results: The number density of quiescent galaxies is found to increase since z ∼ 1, with a more substantial variation at lower stellar mass. Quiescent galaxies feature extinction AV < 0.6, with median values in the range AV = 0.15-0.3. At increasing stellar mass, quiescent galaxies are older and more metal rich since z ∼ 1. A detailed analysis of the PDFs reveals that the evolution of quiescent galaxies is not compatible with passive evolution and a slight decrease of 0.1-0.2 dex is hinted at median metallicity. The intrinsic dispersion of the age and metallicity PDFs show a dependence on stellar mass and/or redshift. These results are consistent with both sets of SSP models and assumptions of alternative star formation histories explored. Consequently, the quiescent population must undergo an evolutive pathway including mergers and/or remnants of star formation to reconcile the observed trends, where the "progenitor" bias should also be taken into account.

Based on observations collected at the Centro Astronómico Hispano Alemán (CAHA) at Calar Alto, operated jointly by the Max-Planck Institut für Astronomie and the Instituto de Astrofísica de Andalucía (CSIC). 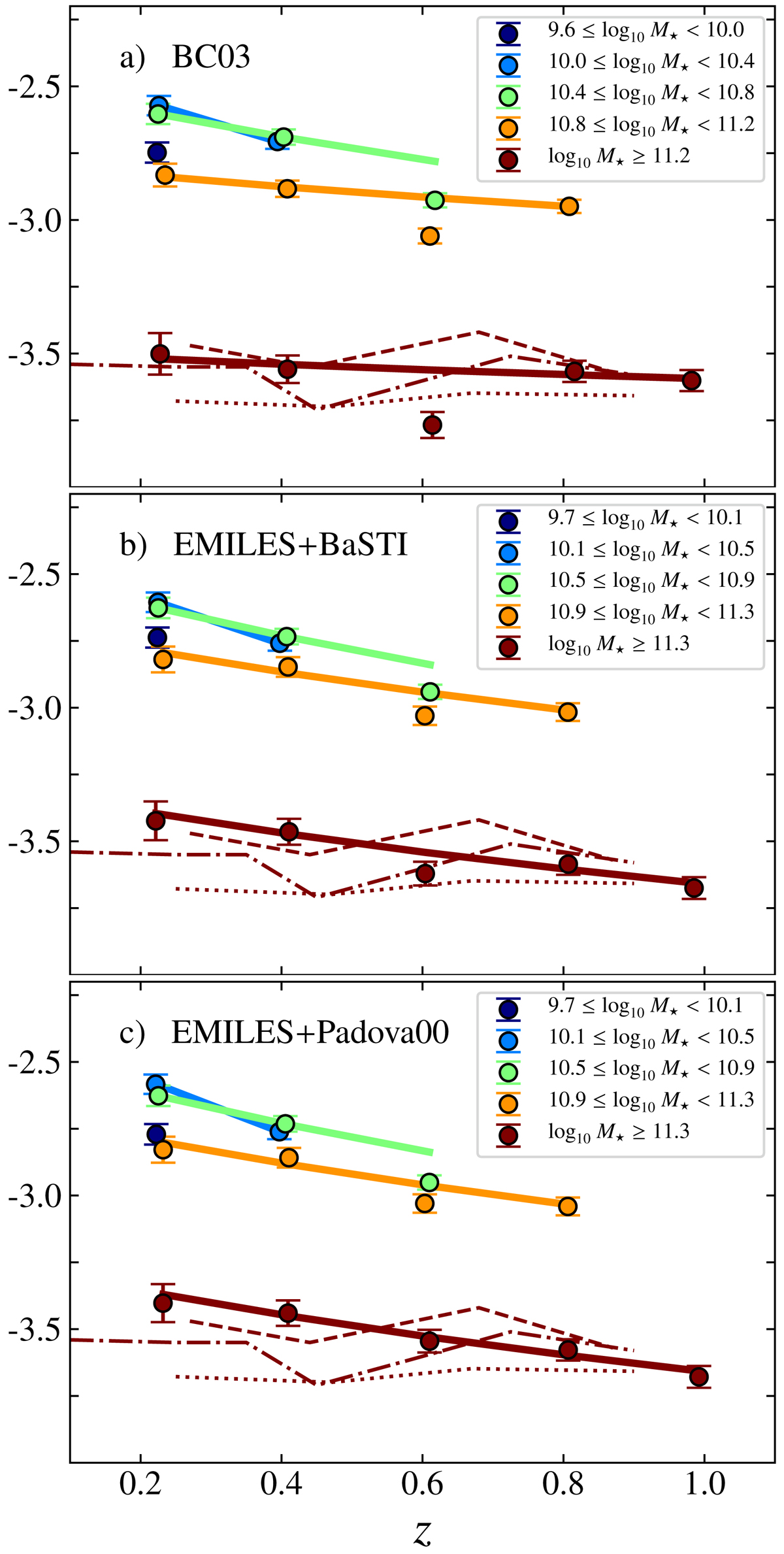