Aims: In the framework of the multi-wavelength and very long baseline interferometry (VLBI) monitoring program TANAMI (Tracking Active Nuclei with Austral Milliarcsecond Interferometry), we study the evolution of the parsec-scale radio emission in radio galaxies in the southern hemisphere and their relationship to the γ-ray properties of the sources. Our study investigates systematically, for the first time, the relationship between the two energy regimes in radio galaxies. In this first paper, we focus on Fermi-LAT-detected sources.
Methods: The TANAMI program monitors a large sample of radio-loud AGN at 8.4 GHz and 22.3 GHz with the Australian long baseline array (LBA) and associated telescopes in Antarctica, Chile, New Zealand and South Africa. We performed a kinematic analysis for five γ-ray detected radio galaxies using multi-epoch 8.4 GHz VLBI images, deriving limits on intrinsic jet parameters such as speed and viewing angle. We analyzed 103 months of Fermi-LAT data in order to study possible connections between the γ-ray properties and the pc-scale jets of Fermi-LAT-detected radio galaxies, both in terms of variability and average properties. We discuss the individual source results and draw preliminary conclusions on sample properties including published VLBI results from the MOJAVE (Monitoring Of Jets in Active galactic nuclei with VLBA Experiments) survey, with a total of fifteen sources.
Results: We find that the first γ-ray detection of Pictor A might be associated with the passage of a new VLBI component through the radio core, which appears to be a defining feature of high-energy emitting Fanaroff-Riley type II radio galaxies. We detect subluminal parsec-scale jet motions in the peculiar AGN PKS 0521-36, and we confirm the presence of fast γ-ray variability in the source down to timescales of six hours, which is not accompanied by variations in the VLBI jet. We robustly confirm the presence of significant superluminal motion, up to βapp ∼ 3, in the jet of the TeV radio galaxy PKS 0625-35. Our VLBI results constrain the jet viewing angle to be θ < 53°, allowing for the possibility of a closely aligned jet. Finally, by analyzing the first pc-scale multi-epoch images of the prototypical compact symmetric object (CSO) PKS 1718-649, we place an upper limit on the separation speed between the two mini-lobes. This in turn allows us to derive a lower limit on the age of the source.
Conclusions: We can draw some preliminary conclusions on the relationship between pc-scale jets and γ-ray emission in radio galaxies, based on Fermi-LAT-detected sources with available multi-epoch VLBI measurements. We find that the VLBI core flux density correlates with the γ-ray flux, as seen in blazars. On the other hand, the γ-ray luminosity does not show any dependence on the core brightness temperature and core dominance, which are two common indicators of jet Doppler boosting. This seems to indicate that γ-ray emission in radio galaxies is not driven by orientation-dependent effects, as in blazars, in accordance with the unified model of jetted AGN. 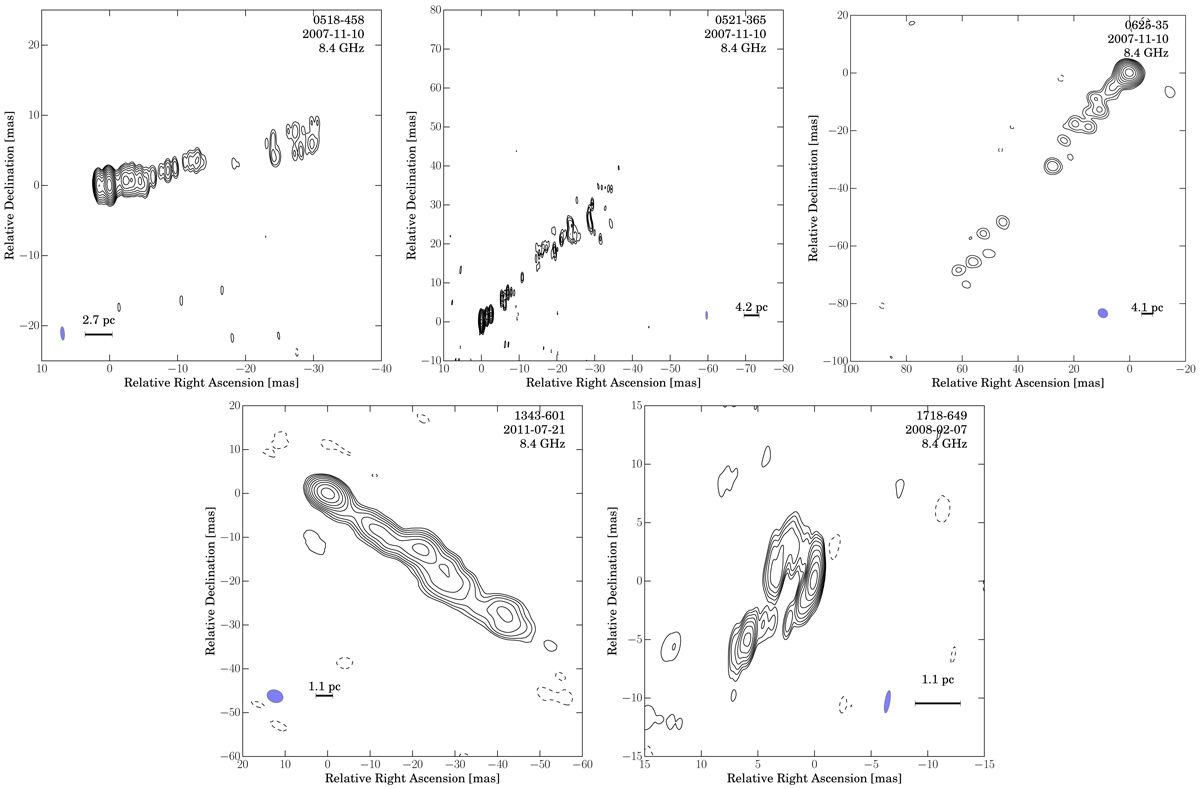