Context. Exoplanet properties crucially depend on the parameters of their host stars: more accurate stellar parameters yield more accurate exoplanet characteristics. When the exoplanet host star shows pulsations, asteroseismology can be used for an improved description of the stellar parameters.
Aims: We aim to revisit the pulsational properties of β Pic and identify its pulsation modes from normalized amplitudes in five different passbands. We also investigate the potential presence of a magnetic field.
Methods: We conducted a frequency analysis using three seasons of BRITE-Constellation observations in the two BRITE filters, the about 620-day-long bRing light curve, and the nearly 8-year-long SMEI photometric time series. We calculated normalized amplitudes using all passbands and including previously published values obtained from ASTEP observations. We investigated the magnetic properties of β Pic using spectropolarimetric observations conducted with the HARPSpol instrument. Using 2D rotating models, we fit the normalized amplitudes and frequencies through Monte Carlo Markov chains.
Results: We identify 15 pulsation frequencies in the range from 34 to 55 d-1, where two, F13 at 53.6917 d-1 and F11 at 50.4921 d-1, display clear amplitude variability. We use the normalized amplitudes in up to five passbands to identify the modes as three ℓ = 1, six ℓ = 2, and six ℓ = 3 modes. β Pic is shown to be non-magnetic with an upper limit of the possible undetected dipolar field of 300 Gauss.
Conclusions: Multiple fits to the frequencies and normalized amplitudes are obtained, including one with a near equator-on inclination for β Pic, which corresponds to our expectations based on the orbital inclination of β Pic b and the orientation of the circumstellar disk. This solution leads to a rotation rate of 27% of the Keplerian breakup velocity, a radius of 1.497 ± 0.025 R⊙, and a mass of 1.797 ± 0.035 M⊙. The ∼2% errors in radius and mass do not account for uncertainties in the models and a potentially erroneous mode-identification.

Based on data collected by the BRITE Constellation satellite mission, designed, built, launched, operated and supported by the Austrian Research Promotion Agency (FFG), the University of Vienna, the Technical University of Graz, the University of Innsbruck, the Canadian Space Agency (CSA), the University of Toronto Institute for Aerospace Studies (UTIAS), the Foundation for Polish Science & Technology (FNiTP MNiSW), and National Science Centre (NCN).Based on observations made with ESO Telescopes at the La Silla Paranal Observatory under programme ID 094.D-0274A.Light-curve data are only available at the CDS via anonymous ftp to http://cdsarc.u-strasbg.fr (ftp://130.79.128.5) or via http://cdsarc.u-strasbg.fr/viz-bin/qcat?J/A+A/627/A28 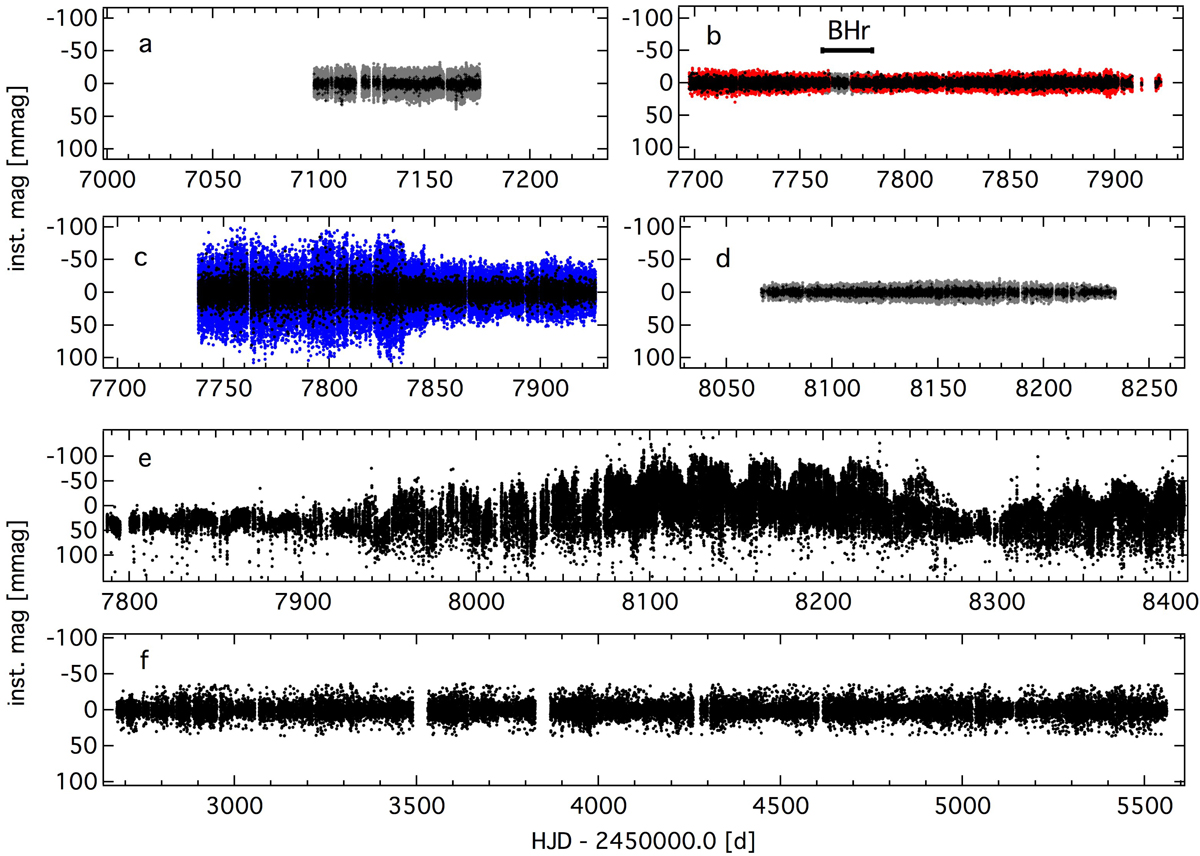