Gliese 49: activity evolution and detection of a super-Earth. A HADES and CARMENES collaboration

Context. Small planets around low-mass stars often show orbital periods in a range that corresponds to the temperate zones of their host stars which are therefore of prime interest for planet searches. Surface phenomena such as spots and faculae create periodic signals in radial velocities and in observational activity tracers in the same range, so they can mimic or hide true planetary signals.
Aims: We aim to detect Doppler signals corresponding to planetary companions, determine their most probable orbital configurations, and understand the stellar activity and its impact on different datasets.
Methods: We analyzed 22 yr of data of the M1.5 V-type star Gl 49 (BD+61 195) including HARPS-N and CARMENES spectrographs, complemented by APT2 and SNO photometry. Activity indices are calculated from the observed spectra, and all datasets are analyzed with periodograms and noise models. We investigated how the variation of stellar activity imprints on our datasets. We further tested the origin of the signals and investigate phase shifts between the different sets. To search for the best-fit model we maximize the likelihood function in a Markov chain Monte Carlo approach.
Results: As a result of this study, we are able to detect the super-Earth Gl 49b with a minimum mass of 5.6 M⊕. It orbits its host star with a period of 13.85 d at a semi-major axis of 0.090 au and we calculate an equilibrium temperature of 350 K and a transit probability of 2.0%. The contribution from the spot-dominated host star to the different datasets is complex, and includes signals from the stellar rotation at 18.86 d, evolutionary timescales of activity phenomena at 40-80 d, and a long-term variation of at least four years.

Based on observations made with the Italian TNG, operated on the island of La Palma, Spain; the CARMENES instrument installed at the 3.5 m telescope of the Calar Alto Observatory, Spain; the robotic APT2 located at Serra La Nave on Mt. Etna, Italy; and the T90 telescope at Sierra Nevada Observatory, Spain.Full Table A.1 is only available at the CDS via anonymous ftp to http://cdsarc.u-strasbg.fr (ftp://130.79.128.5) or via http://cdsarc.u-strasbg.fr/viz-bin/qcat?J/A+A/624/A123 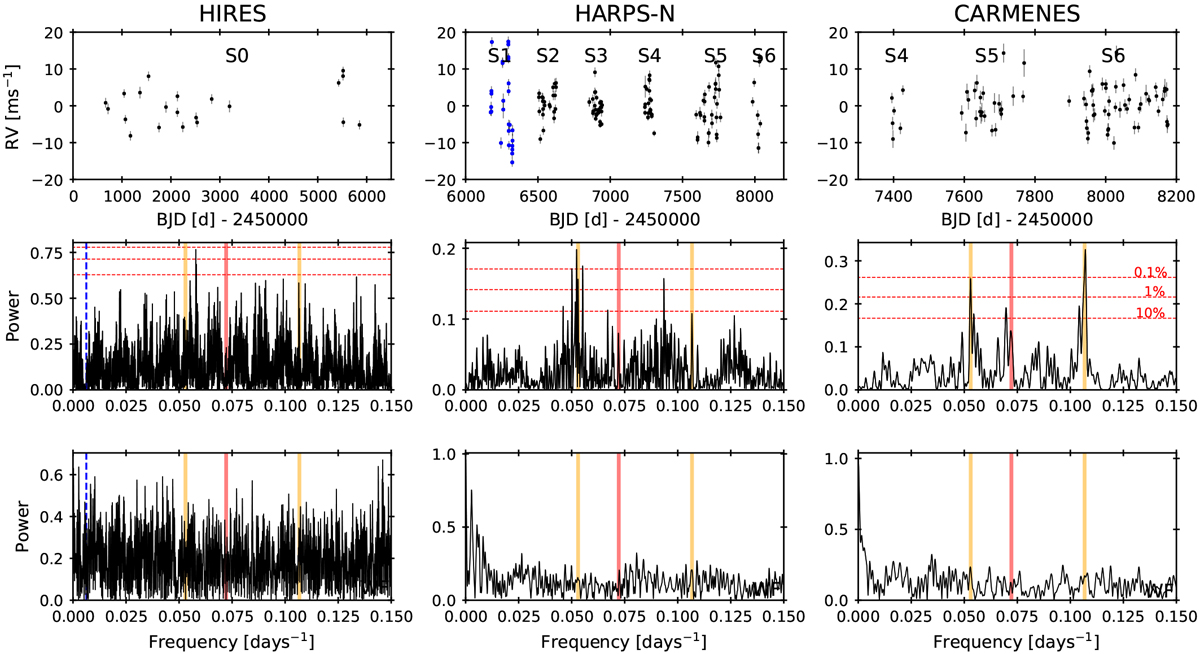