We analyse scaling relations and evolution histories of galaxy sizes in TNG100, part of the IllustrisTNG simulation suite. Observational qualitative trends of size with stellar mass, star formation rate and redshift are reproduced, and a quantitative comparison of projected r band sizes at 0 ≲ z ≲ 2 shows agreement to much better than 0.25 dex. We follow populations of z = 0 galaxies with a range of masses backwards in time along their main progenitor branches, distinguishing between main-sequence and quenched galaxies. Our main findings are as follows. (i) At M*, z = 0 ≳ 109.5 M⊙, the evolution of the median main progenitor differs, with quenched galaxies hardly growing in median size before quenching, whereas main-sequence galaxies grow their median size continuously, thus opening a gap from the progenitors of quenched galaxies. This is partly because the main-sequence high-redshift progenitors of quenched z = 0 galaxies are drawn from the lower end of the size distribution of the overall population of main-sequence high-redshift galaxies. (ii) Quenched galaxies with M*, z = 0 ≳ 109.5 M⊙ experience a steep size growth on the size-mass plane after their quenching time, but with the exception of galaxies with M*, z = 0 ≳ 1011 M⊙, the size growth after quenching is small in absolute terms, such that most of the size (and mass) growth of quenched galaxies (and its variation among them) occurs while they are still on the main sequence. After they become quenched, the size growth rate of quenched galaxies as a function of time, as opposed to versus mass, is similar to that of main-sequence galaxies. Hence, the size gap is retained down to z = 0. 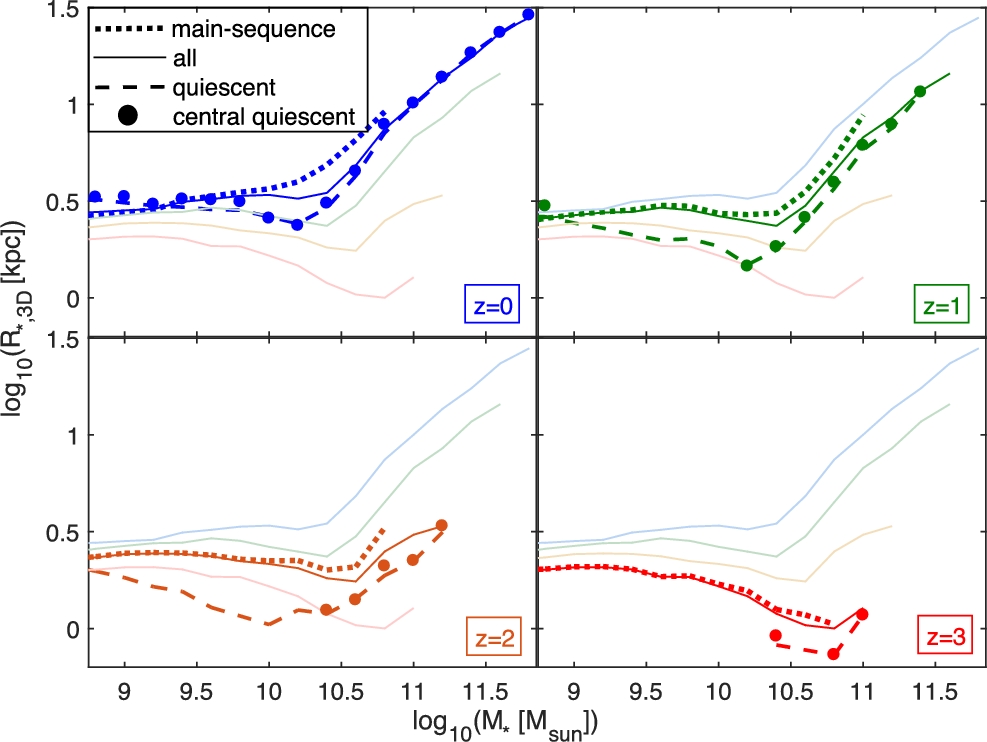