We report the discovery of six spatially extended (10-100 kpc) line-emitting nebulae in the z ≈ 0.57 galaxy group hosting PKS 0405-123, one of the most luminous quasars at z < 1. The discovery is enabled by the Multi Unit Spectroscopic Explorer and provides tantalizing evidence connecting large-scale gas streams with nuclear activity on scales of <10 proper kpc (pkpc). One of the nebulae exhibits a narrow, filamentary morphology extending over 50 pkpc toward the quasar with narrow internal velocity dispersion (50 {km} {{{s}}}-1) and is not associated with any detected galaxies, consistent with a cool intragroup medium filament. Two of the nebulae are 10 pkpc north and south of the quasar with tidal-arm-like morphologies. These two nebulae, along with a continuum-emitting arm extending 60 pkpc from the quasar, are signatures of interactions that are expected to redistribute angular momentum in the host interstellar medium (ISM) to facilitate star formation and quasar fueling in the nucleus. The three remaining nebulae are among the largest and most luminous [O III] emitting “blobs” known (1400-2400 pkpc2) and correspond both kinematically and morphologically to interacting galaxy pairs in the quasar host group, consistent with arising from stripped ISM rather than large-scale quasar outflows. The presence of these large- and small-scale nebulae in the vicinity of a luminous quasar bears significantly on the effect of large-scale environment on galaxy and black hole fueling, providing a natural explanation for the previously known correlation between quasar luminosity and cool circumgalactic medium. 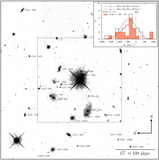