We present photometric analysis of 12 Galactic open clusters and show that the same multiple-population phenomenon observed in Magellanic Clouds (MCs) is present in nearby open clusters. Nearly all the clusters younger than ∼2.5 Gyr of both MCs exhibit extended main-sequence turnoffs (eMSTOs) and all the cluster younger than ∼700 Myr show broadened/split main sequences (MSs). High-resolution spectroscopy has revealed that these clusters host stars with a large spread in the observed projected rotations. In addition to rotation, internal age variation is indicated as possibly responsible for the eMSTOs, making these systems the possible young counterparts of globular clusters with multiple populations. Recent work has shown that the eMSTO+broadened MSs are not a peculiarity of MCs clusters. Similar photometric features have been discovered in a few Galactic open clusters, challenging the idea that the color-magnitude diagrams (CMDs) of these systems are similar to single isochrones and opening new windows to explore the eMSTO phenomenon. We exploit photometry+proper motions from Gaia DR2 to investigate the CMDs of open clusters younger than ∼1.5 Gyr. Our analysis suggests that: (i) 12 open clusters show eMSTOs and/or broadened MSs, which cannot be due to either field contamination or binaries; (ii) split/broadened MSs are observed in clusters younger than ∼700 Myr, while older objects display only an eMSTO, similarly to MCs clusters; (iii) the eMSTO, if interpreted as a pure age spread, increases with age, following the relation observed in MCs clusters and demonstrating that rotation is responsible for this phenomenon. 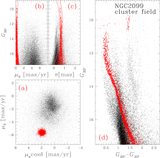