We present a detailed study of the disk around the intermediate-mass star SO 411, aiming to explain the spectral energy distribution of this star. We show that this is a transitional disk truncated at ∼11 au, with ∼0.03 lunar masses of optically thin dust inside the cavity. Gas also flows through the cavity, since we find that the disk is still accreting mass onto the star, at a rate of ∼5 × 10-9 M ☉ yr-1. Until now, SO 411 has been thought to belong to the ∼3 Myr old σ Orionis cluster. However, we analyzed the second Gaia Data Release in combination with kinematic data previously reported and found that SO 411 can be associated with a sparse stellar population located in front of the σ Orionis cluster. If this is the case, then SO 411 is older and even more peculiar, since primordial disks in this stellar mass range are scarce for ages >5 Myr. Analysis of the silicate 10 μm feature of SO 411 indicates that the observed feature arises at the edge of the outer disk and displays a very high crystallinity ratio of ∼0.5, with forsterite the most abundant silicate crystal. The high forsterite abundance points to crystal formation in nonequilibrium conditions. The PAH spectrum of SO 411 is consistent with this intermediate state between the hot and luminous Herbig Ae and the less massive and cooler T Tauri stars. Analysis of the 7.7 μm PAH feature indicates that small PAHs still remain in the SO 411 disk. 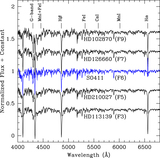