NuSTAR Detection of Nonthermal Bremsstrahlung from the Supernova Remnant W49B

We report on NuSTAR observations of the mixed morphology supernova remnant (SNR) W49B, focusing on its nonthermal emission. Whereas radio observations as well as recent gamma-ray observations evidenced particle acceleration in this SNR, nonthermal X-ray emission has not been reported so far. With the unprecedented sensitivity of NuSTAR in the hard X-ray band, we detect a significant power-law-like component extending up to ∼20 keV, most probably of nonthermal origin. The newly discovered component has a photon index of {{Γ }}={1.4}-1.1+1.0 with an energy flux between 10 and 20 keV of (3.3 ± 0.7) × 10-13 erg cm-2 s-1. The emission mechanism is discussed based on the NuSTAR data combined with those in other wavelengths in the literature. The NuSTAR data, in terms both of the spectral slope and of the flux, are best interpreted as nonthermal electron bremsstrahlung. If this scenario is the case, then the NuSTAR emission provides a new probe to sub-relativistic particles accelerated in the SNR. 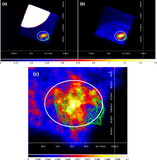