We present a 3° × 3°, 105-pointing, high-resolution neutral hydrogen (H I) mosaic of the M81 galaxy triplet, (including the main galaxies M81, M82, and NGC 3077, as well as dwarf galaxy NGC 2976) obtained with the Very Large Array C and D arrays. This H I synthesis mosaic uniformly covers the entire area and velocity range of the triplet. The observations have a resolution of ∼20″ or ∼420 pc. The data reveal many small-scale anomalous velocity features highlighting the complexity of the interacting M81 triplet. We compare our data with Green Bank Telescope observations of the same area. This comparison provides evidence for the presence of a substantial reservoir of low-column density gas in the northern part of the triplet, probably associated with M82. Such a reservoir is not found in the southern part. We report a number of newly discovered kpc-sized low-mass H I clouds with H I masses of a few times 106 M ⊙. A detailed analysis of their velocity widths show that their dynamical masses are much larger than their baryonic masses, which could indicate the presence of dark matter if the clouds are rotationally supported. However, due to their spatial and kinematical association with H I tidal features, it is more likely that the velocity widths indicate tidal effects or streaming motions. We do not find any clouds that are not associated with tidal features down to an H I mass limit of a few times 104 M ⊙. We compare the H I column densities with resolved stellar density maps and find a star formation threshold around 3-6 × 1020 cm-2. We investigate the widths of the H I velocity profiles in the triplet and find that extreme velocity dispersions can be explained by a superposition of multiple components along the line of sight near M81 as well as winds or outflows around M82. The velocity dispersions found are high enough that these processes could explain the linewidths of damped-Lyα absorbers observed at high redshift. 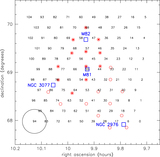