We present near-IR imaging polarimetry of five classical FU Ori-type objects (FU Ori, V1057 Cyg, V1515 Cyg, V1735 Cyg, Z CMa) with an ∼0.″1 resolution observed using HiCIAO+AO188 at the Subaru Telescope. We observed scattered light associated with circumstellar dust around four of them (i.e., all but V1515 Cyg). Their polarized intensity distribution shows a variety of morphologies with arms, tails or streams, spikes, and fragmented distributions, many of which were reported in our previous paper. The morphologies of these reflection nebulae significantly differ from many other normal young stellar objects (Class I-II objects). These structures are attributed to gravitationally unstable disks, trails of clump ejections, dust blown by a wind or a jet, and a stellar companion. We can consistently explain our results with the scenario that their accretion outbursts (FUor outbursts) are triggered by gravitationally fragmenting disks, and with the hypothesis that many low-mass young stellar objects experience such outbursts.

Based on data collected at the Subaru Telescope, which is operated by the National Astronomical Observatory of Japan. 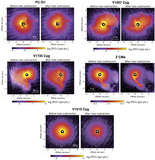