ALMA Observations of Supernova Remnant N49 in the LMC. I. Discovery of CO Clumps Associated with X-Ray and Radio Continuum Shells

N49 (LHA 120-N49) is a bright X-ray supernova remnant (SNR) in the Large Magellanic Cloud. We present new 12CO (J = 1-0, 3-2), H I, and 1.4 GHz radio continuum observations of the SNR N49 using Mopra, ASTE, ALMA, and ATCA. We have newly identified three H I clouds using ATCA with an angular resolution of ∼20″: one associated with the SNR and the others located in front of the SNR. Both the CO and H I clouds in the velocity range from 281 to 291 km s-1 are spatially correlated with both the soft X-rays (0.2-1.2 keV) and the hard X-rays (2.0-7.0 keV) of N49 on a ∼10 pc scale. CO 3-2/1-0 intensity ratios indicate higher values of the CO cloud toward the SNR shell with an angular resolution of ∼45″, and thus a strong interaction was suggested. Using the ALMA, we have spatially resolved CO clumps embedded within or along the southeastern rim of N49 with an angular resolution of ∼3″. Three of the CO clumps are rim brightened on a 0.7-2 pc scale in both hard X-rays and the radio continuum: this provides further evidence for dynamical interactions between the CO clumps and the SNR shock wave. The enhancement of the radio synchrotron radiation can be understood in terms of magnetic field amplification around the CO clumps via a shock-cloud interaction. We also present a possible scenario in which the recombining plasma that dominates the hard X-rays from N49 was formed via thermal conduction between the SNR shock waves and the cold/dense molecular clumps. 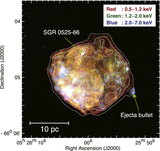