Clocking the Evolution of Post-starburst Galaxies: Methods and First Results

Detailed modeling of the recent star formation histories (SFHs) of post-starburst (or “E+A”) galaxies is impeded by the degeneracy between the time elapsed since the starburst ended (post-burst age), the fraction of stellar mass produced in the burst (burst strength), and the burst duration. To resolve this issue, we combine GALEX ultraviolet photometry, SDSS photometry and spectra, and new stellar population synthesis models to fit the SFHs of 532 post-starburst galaxies. In addition to an old stellar population and a recent starburst, 48% of the galaxies are best fit with a second recent burst. Lower stellar mass galaxies (log M ⋆/M ☉ < 10.5) are more likely to experience two recent bursts, and the fraction of their young stellar mass is more strongly anticorrelated with their total stellar mass. Applying our methodology to other, younger post-starburst samples, we identify likely progenitors to our sample and examine the evolutionary trends of molecular gas and dust content with post-burst age. We discover a significant (4σ) decline, with a 117-230 Myr characteristic depletion time, in the molecular gas to stellar mass fraction with the post-burst age. The implied rapid gas depletion rate of 2-150 M ☉ yr-1 cannot be due to current star formation, given the upper limits on the current star formation rates in these post-starbursts. Nor are stellar winds or supernova feedback likely to explain this decline. Instead, the decline points to the expulsion or destruction of molecular gas in outflows, a possible smoking gun for active galactic nucleus feedback. 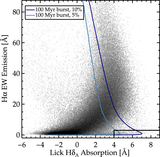