About 30% of Sun-like Stars Have Kepler-like Planetary Systems: A Study of Their Intrinsic Architecture

We constrain the intrinsic architecture of Kepler planetary systems by modeling the observed multiplicities of the transiting planets (tranets) and their transit timing variations (TTVs). We robustly determine that the fraction of Sun-like stars with Kepler-like planets, η Kepler, is 30 ± 3%. Here, Kepler-like planets are planets that have radii R p ≳ R ⊕ and orbital periods P < 400 days. Our result thus significantly revises previous claims that more than 50% of Sun-like stars have such planets. Combined with the average number of Kepler planets per star (∼0.9), we obtain that on average each planetary system has 3.0 ± 0.3 planets within 400 days. We also find that the dispersion in orbital inclinations of planets within a given planetary system, σ i,k , is a steep function of its number of planets, k. This can be parameterized as {σ }i,k\propto {k}α and we find that -4 < α < -2 at the 2σ level. Such a distribution well describes the observed multiplicities of both transits and TTVs with no excess of single-tranet systems. Therefore we do not find evidence supporting the so-called “Kepler dichotomy.” Together with a previous study on orbital eccentricities, we now have a consistent picture: the fewer planets in a system, the hotter it is dynamically. We discuss briefly possible scenarios that lead to such a trend. Despite our solar system not belonging to the Kepler club, it is interesting to notice that the solar system also has three planets within 400 days and that the inclination dispersion is similar to Kepler systems of the same multiplicity. 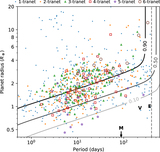